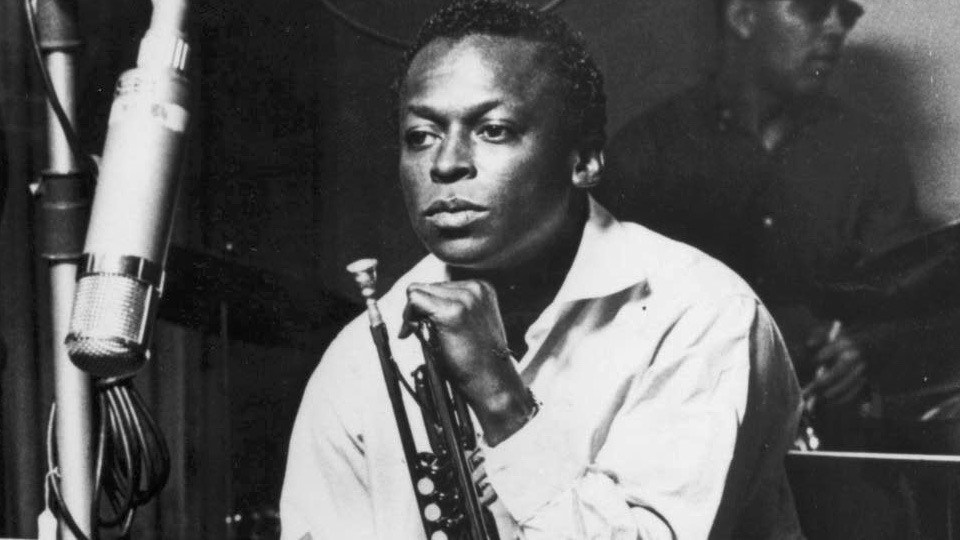 In the dictionary, “cool” and “Miles Davis” should be listed as synonyms.

Stanley Nelson Jr.’s 2019 documentary, Miles Davis: Birth of the Cool tells a story of the late jazz legend’s thrilling and tumultuous life, and the indelible influence he had on jazz as we know it. The Netflix-backed documentary delves into Davis’s upbringing, love life, inner demons, and how all of these facets of himself ultimately inspired his distinct style of jazz music. May 26th marks Davis’s birthday, and today, we take a trip back to New York City’s late-night 52nd street jazz scene, where Davis and his trumpet hit the block swingin’.

Miles Davis was born in 1926 in East St. Louis, a place that the film describes as “racist to the bone.” Growing up, he faced racial violence and injustices, despite coming from a wealthy, upper-class family. Later, it is revealed that a great deal of the racism and adversity he endured in his youth and early adulthood would heavily influence the emotional tones of some of his greatest compositions.

From the get-go, Davis was playing with some of the best-known jazz musicians of all time – but little did he know it. After high school, he quickly joined big bands with the likes of Charlie “Bird” Parker and Dizzy Gillespie, among many others. The documentary notes his reluctance to play trumpet at first, but his father was the one that pushed him to pursue the instrument. His televised big band gigs left him wanting more, and like many jazzheads at the time, he flocked to New York City’s nightclub scene where jazz music was alive and well.

While in New York, he attended Julliard and played in as many clubs as he could. At this time, the city had a vibrant live music scene on 52nd street, with jazz music being played at every bar and dive, every single night. Eventually, he followed love interest and actress Juliette Greco to Paris and found himself surrounded by other intellectuals of his time that shared his innovative and creative spirit. However, his return to Jim Crow-era America left him longing for the opportunity and creative freedom he experienced in Paris, and soon after he developed a heroin addiction. His father made him return to his hometown in East St. Louis to sober up, leaving him with newfound hope that he could regain his footing in the jazz world. And thus, the Miles Davis Quintet and Kind Of Blue are born.

Related: “‘Chill Music’ Makes A Comeback In the Time of COVID”

One of the special aspects of Birth of the Cool as a film is the myriad musical legends and popular music critics and historians that are featured throughout. Their personal experiences with Davis that they share so candidly truly carry the storyline of Davis’s life with flare. While delving into the Kind of Blue era, Nelson lets these musical giants speak for themselves on what Kind Of Blue meant to them.

“You can listen hundreds of times. It always has something new to say,” shared music historian, critic, and journalist Ashley Kahn. “And that, for me, is the definition of a masterpiece.”

“Miles had a way of playing that sounded like a stone skipping across a pond,” described Davis’s bandmate and jazz great Herbie Hancock. “He just touched on the waves.”

Nelson also highlights many events in Davis’s life that truly catapulted his career: his record deal with Columbia Records (described by Kahn as “the Tiffany of record labels” at the time,) his performance at the 1955 Newport Jazz Festival, and the release of Someday My Prince Will Come, which featured his then-girlfriend and model Frances Taylor on the cover. Even after the mainstream success of Kind Of Blue, Davis continued to feature new and emerging jazz musicians to play in his bands, such as Tony Williams and Herbie Hancock.

Nelson also guides the story of Davis’s life by noting prominent events from each year. The “1969” leg of the documentary focuses on how Davis wanted to stay hip with the times, as rock and roll and funk music were on the rise, and jazz was fading into the background. As a result, he began to change his look and sound – trading in his sharp suit and tie for swagger-infused numbers and albums like Bitches Brew. While the album was popular in both the funk and jazz scene, Davis began to spiral downward in his addiction more and more. While the pain that drove Davis to abuse drugs also drove the emotion behind much of his music, it derailed his musical career and personal relationships in many instances throughout his life. With the release of Bitches Brew in 1970, many began to see the effects that Davis’s addiction had taken on his mind and body.

Davis passed away on September 28th, 1991, and remains one of the most impactful musicians in the history of jazz music. Birth of the Cool beautifully showcases the good, the bad, and the beautifulness of his musical collection. While the legend himself is gone, his music will continue to transcend time.

And in the words of Miles Davis himself that seem to resonate so strongly with our current times: “Living is an adventure and a challenge…if anybody wants to keep creating, they have to be about change.”

3 comments on “Miles Davis: Still Cool As Ever”