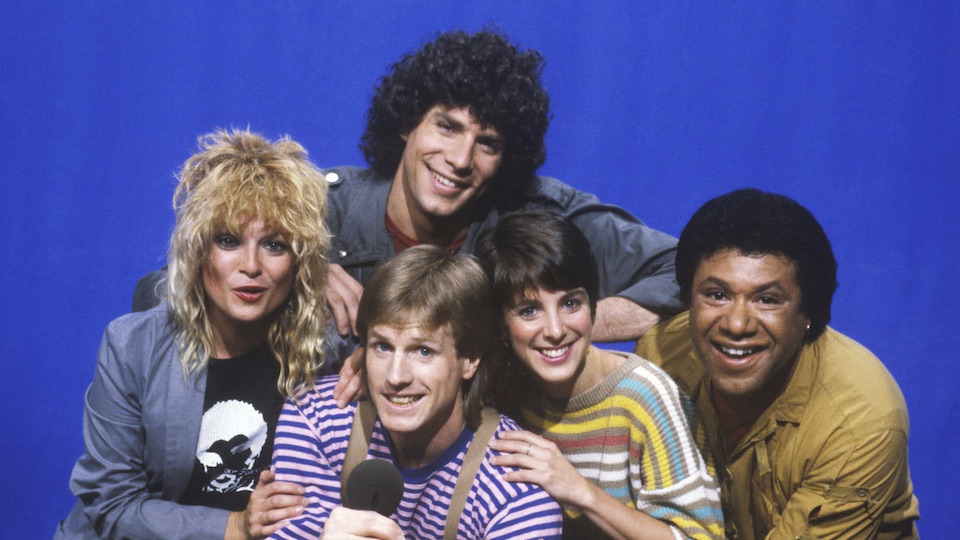 MTV was officially launched when the music video for “Video Killed The Radio Star” by The Buggles was played on August 1, 1981. In addition to revolutionizing the way we watched (and listened to) music, MTV gave us our first look at 5 talented people who became an integral part of the experience for fans of “music television.” They were the channel’s original VJs or video jockeys: Nina Blackwood, Mark Goodman, Alan Hunter, J.J. Jackson and Martha Quinn. The book VJ: The Unplugged Adventures of MTV’s First Wave is a compelling oral history of those early days at MTV, co-authored by the four surviving members of that original crew (J.J. Jackson died in 2004, and the book is dedicated to him) with Gavin Edwards.

The casual, conversational style of the narrative allows you to feel like you’re hanging out with the VJs, as they chat openly about becoming celebrities in their own right, and how they reacted to their newfound fame. Each of them auditioned for their spots as VJs and were encouraged to develop on-air personas that would appeal to viewers. Nina Blackwood became the rock chick, Mark Goodman was the good-looking rocker dude, J.J. Jackson was the cool big brother who knew all the of the best bands, Alan Hunter was the class clown, and Martha Quinn (one of the most popular members of the gang) was the cute and perky girl next door. The group (especially Goodman and Jackson, who had been involved with the music business before coming to MTV) weren’t always comfortable with the “characters” they were being asked to play. There also was some initial friction between the VJs, who competed for the best on-air slots, and the best rock star interviews.

MTV quickly became a cultural juggernaut, and the on-air talent began to enjoy their fame. As the channel flourished, the VJs were granted celebrity status, gaining access to all of the best parties, the hottest concerts, and were looked upon as culture and style icons in their own right. MTV was changing the pop music landscape, and the VJs were interviewing, hanging out, and partying with, rock stars and movie stars. But the MTV management kept a tight leash on the group, specifying how they could look and act, which events they covered, and what interview questions they could ask the bands who were featured on air. Inevitably, there was a backlash from the mainstream rock press, which tossed quite a few critical barbs at the VJs, especially regarding their coverage of historic concerts like Live Aid.

All of the VJs have their own unique perspective on their tenure at MTV. The group’s memories of events sometimes don’t line up, and they sometimes seem like a dysfunctional family. But it’s clear that they all have great affection for each other, and feel as if they shared (and survived) an incredible experience together. J.J. Jackson is sorely missed, and his passing clearly had a strong effect on everyone. Jackson’s perspective is shared through some informative archival interviews. Everyone in the group is upfront about their own successes and failings during the height of their fame. The book isn’t mean-spirited, just honest and forthright. It’s refreshing to read a memoir of this type that isn’t all about dishing dirt and trashing celebrities There’s also a lot of “fly on the wall” background information about the history of MTV, and how the network was run during its heyday.

You’ll learn some fascinating things, such as the fact that the VJs often didn’t get to view the videos before they aired, so they were commenting on something they hadn’t seen. In fact, until MTV actually aired on cable in the New York area, they didn’t’ even see themselves on air! There are some fun tidbits about icons like David Lee Roth, Madonna, John Mellencamp, and Cyndi Lauper, and also behind-the-scenes perspectives regarding the channel’s live shows, such as the New Year’s Eve and Spring Break events. The VJs also acknowledge the sea change at the network, when MTV began to bring in other on-air personalities, and shifted away from music programming, spelling the end for the original on-air team’s reign. VJ: The Unplugged Adventures of MTV’s First Wave is an enjoyable look at a colorful era in music and television history. If you still want your MTV, the book is a great place to get your fix.

5 comments on “MTV: When Video Killed the Radio Star…and Created Others”