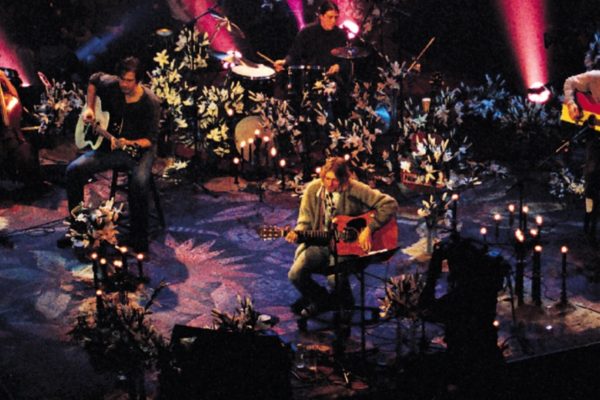 Although now an indispensable part of the band’s legacy, the idea of Nirvana doing an acoustic live album must’ve sounded weird back in 1993. After all, they were in the forefront of the whole grunge movement – a genre that is credited with bringing electric guitar-driven music back into the mainstream. Both Nevermind and In Utero shook the rock scene with a sense of heaviness and threat that had been missing for quite some time, with the popular bands playing it too safe and underground ones’ voice not being heard. But then came the natural question: is Kurt Cobain an actual good songwriter behind all the hype? Do these songs still hold up after you take away the wall of distortion and strip them to their essentials?

[amazon template=right aligned image&asin=B000000OU2]MTV Unplugged in New York answers all of these with a big, confident yes. Take a song like “Come as You Are” – in the original version the main focus was the “underwater” guitar tone, the chorus explosion and the general unsettling vibe, with the words and vocals only adding to that atmosphere. Here, the latter two take center stage – each word is sung as if on the point of breaking down, with Kurt stretching his voice throughout. The song no longer rocks, but instead enters a singer-songwriter territory, where a feeling of desperation is felt through every note and word. “Pennyroyal Tea” again is all about that bleak dread and self-hatred – a dimension that was always there in the original but that is now made explicit. Before, you could either pay attention to the lyrics or not; here, phrases such as “distill the life that’s inside of me” or “I’m so tired I can’t sleep” seem to fix into your brain and haunt you long after the song is over.

The performance does not consist of Nirvana’s biggest hits, but it doesn’t focus exclusively on deep cuts either as some tend to assume. Instead, the songs seem to be selected based on whether the band felt they could fit them into this singer-songwriter mold. “Polly” and “Something in the Way” were obvious choices, both originally acoustic. The Beatles-inspired “About a Girl” has always been more about its hooky melody than any head-banging quality, so the stripped-down version makes sense. But the album’s biggest surprise actually comes from the covers – in the same way Bowie went on to produce Lou Reed and The Stooges at the height of his popularity, Nirvana selflessly shine a light on the bands that influenced them. Bowie himself is covered (“The Man Who Sold the World”), as are The Vaselines (“Jesus Doesn’t Want Me for a Sunbeam”) and the Meat Puppets are even invited on the set for three performances together (“Plateau,” “Oh, Me” and “Lake of Fire”).

Although all worthy, none really comes close to the earth-shattering rendition of Leadbelly’s “Where Did You Sleep Last Night.” “All Apologies” would’ve worked fine enough as an album closer, as proved by In Utero, but “Sleep” perhaps seems fitting as the conclusion to Kurt’s whole life: knowing that he died less than 5 months after this concert makes the climax of the song all the more powerful. The moment where the whole band stops for few seconds as Cobain’s howling gets more and more intense has to be heard (or seen if you’re willing to pick up the DVD) to be believed. And who knows, perhaps this is the direction the band would’ve followed with their next studio releases if they had the chance. But as it is, MTV Unplugged remains their swan song, a stunning performance that will still blow your mind even if you’re not aware of the historical importance it carries.

PS. If you like Nirvana, you may also enjoy our posts Living Through the Pre-Internet Indie Rock Explosion and Revisiting R.E.M.’s “Out of Time” 25 Years Later.