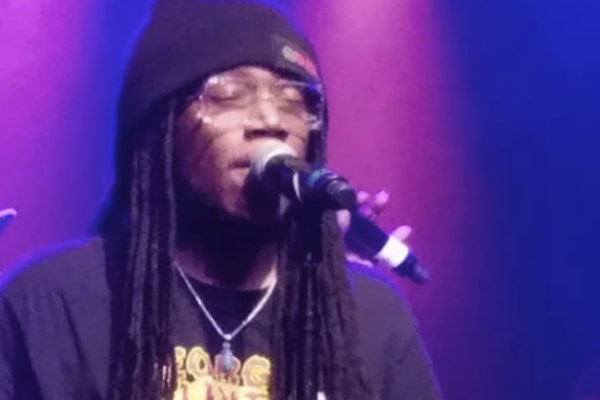 Anyone attending recent George Clinton/Parliament-Funkadelic shows is bound to notice the offspring of past members in the band. One of those next-generation musicians is guitarist-vocalist Garrett Shider, son of late guitarist Garry Shider, the co-writer of such stellar P-Funk jams such as “One Nation Under a Groove” and “Atomic Dog.” Garrett released his first solo album in May of 2017 — Hand Me Down Diapers — which features many members of the current P-Funk entourage. CultureSonar caught up with Shider in North Carolina during P-Funk’s Mardi Gras Madness Tour. What follows is an abridged version of our Funky Fireside chat.

Q: What P-Funk song would you say had the biggest impact on you?

A: Probably “Cosmic Slop” or “One Nation Under a Groove.” Probably, “One Nation” more than any of the others. I always liked the melody and the depth of the song. It has always been a favorite of mine from the earliest memories of the shows since I was born around that time. That melody always seems kinda homely. It’s like I’ve always known that melody from the first time I heard it. It’s a pretty melody and a pretty deep song. Always been one of my favorites.

Q: What was your biggest non-P-Funk influence? Musically speaking.

A: Probably Michael Jackson or Stevie Wonder… I was pretty fond of Michael Jackson as a child. He’s always been one of my favorite entertainers and vocalists. Just because of the things that he did as a child. The fact that he had the awareness and the wherewithal to do some of those things and perform some of those things was always inspiring for me. And also Ray Charles. I picked up on Ray Charles when the movie came out. When I watched the movie, I really dug into a lot of Ray Charles and I became a diehard fan.

A: I had my era when I was into rap too, but the thing with rap to me, I don’t hate it at all because it’s my era. I especially like the golden age of rap. The 1990s. You know, that’s when I was coming up. So there was a lot of good music coming out when I was a teen. But none of it for me has the depth of the music prior to that. I’ve always been a fan of creating music. Through all my years of dealing with music, I never knew how to sample anything. I’ve never learned how to do that. I’ve always created music from scratch. I’ve always seen the importance and the purity of that. Even when rap was in its golden era, nothing from that era is going to compare to anything that I’ve heard that was created from scratch.

Q When did you first get into playing the guitar?

A: I first took an interest in the guitar when I was 16 and the thing with that was, I’ve never had lessons or anything. I was listening to P-Funk all the time. I would listen to the live show, I would be in the room, I’d shut the door and I’d be performing right on stage with them. But the one thing I had never really thought about doing was playing the guitar until I was 16. I forgot what I was listening to and I was like, “Man, I would love to play that!” And I picked up one of my dad’s guitars and I proceeded to try and teach myself how to do it. But the thing about it was, I never wanted him to see me doing that. For whatever reason, I felt foolish. Because I had waited so long and he was great at it.

Q: What was the most valuable piece of advice that you’ve received from your dad?

A: Ah man, you talkin’ famous “Shider-isms.” LOL! “Stick to your guns!” That’s probably the most famous one.

Q: Let’s talk about your debut album called Hand Me Down Diapers.

A: My first ever solo album. I’m already working on my next solo album. Once my pops left this earth, I knew that I had to do it. I was working with very small resources. When my dad left here, I was already working for five years at Fed-Ex. You’re talking about stepping into a whole sea of folks that are like “We loved your dad. Now what you gonna do?” “We’re waiting to see what you’re going to do ’cause we loved your dad!” That was always the first focus, to try and do an album. But limited resources and limited connections, walking into a normal situation and then into this. It’s all been a work in progress. The first couple of situations where I was trying to record the record, the situation was something that I wasn’t comfortable with. They all ended up being situations that let me know that I needed to have my own space to able to record in. Which meant that I had to put my own studio together. So again, limited resources, limited funds. So now we’re talking six years after my father passing away before I finally got myself comfortable and in a situation where I could finally start putting my own studio together. At that point, all I really needed was a computer. I put the program on there and I told myself that I would give myself a month to learn how to use this program. But I ended up getting a program that was really user-friendly. So basically by the time I had loaded in on there, I was recording and I started recording that song “Sugar Rush.” That song just started flowing out of me. At that point, I was like, “Damn, this is fun!”

4 comments on “P-Funk 2.0: An Interview with Garrett Shider”