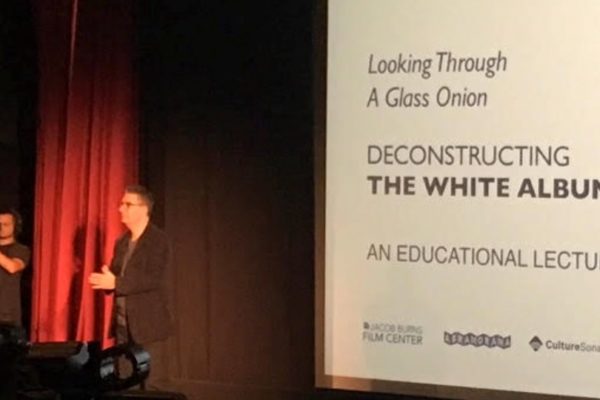 Scott Freiman is our go-to Beatles expert here at CultureSonar and for good reason. Not only is he able to articulate the genius behind the Fab Four’s various compositions but his knowledge of music in general and The Beatles in particular is very, very deep. (They hired him at Yale, you know.) On the eve of the release of four Deconstructing The Beatles films exploring their landmark albums Sgt. Pepper’s…, Rubber Soul, Revolver and The White Album, we caught up with the esteemed lecturer with a quick online Q&A. Click here to learn more about the Deconstructing The Beatles films. (Enter PREFAB for your 10% discount.)

Q: You’ve filmed four multi-media presentations exploring four Beatles albums so far. Which record held the most surprises for you when you were researching it? How so?

A: I find surprises with every album I research. I had never realized the pressure The Beatles were under to record Rubber Soul. Thirty days in which they basically wrote, recorded, and mixed an entire album. And what an album! I loved uncovering the individual loops that were “live mixed” to create “Tomorrow Never Knows” on Revolver. Hearing the individual Indian instruments in “Within You, Without You” and juxtaposing them against Martin’s string arrangement made me gain a new appreciation for the song.

Q: I imagine your audience occasionally shares some fun facts. Was there a piece of trivia that a fan once shared at one of your Beatles lectures that really tickled you?

A: Many people tell me about their personal experiences seeing The Beatles in person or discovering their music. One of the best stories I heard was of a young girl visiting England who was invited to come to Abbey Road for a video shoot. It turned out to be the filming of the “Hey Jude” video. After the video, George Harrison offered to drive her home. She said no, but often wonders what it would have led to!

Q: What was it like teaching “The Beatles in the Studio” at Yale? Were most of the students hardcore fans coming in?

A: I had 15 students from all over the world. The students knew the majority of The Beatles’ music, but they had no historical context. To them, “Here Comes the Sun” and “I Saw Her Standing There” were all just Beatles songs. Throughout the class, I tried to show them how The Beatles evolved as a group. I worked them pretty hard, too. Each student wrote three musical analyses where they looked at a single song from multiple perspectives — history, recording, chord structure, song structure, etc. I learned quite a bit from my students!

A: I’m not sure I would call myself a fanatic! I’m just someone who loves the creative process. When I first became a producer, I re-read some of my more technical Beatles books while listening to outtakes and early takes that I had collected. It was incredibly exciting to see songs and albums evolve. I never expected that my passion would interest so many people, but I’m thrilled it does!

Q: Do you have a favorite Beatles movie?

A: I’ve got two. A Hard Day’s Night is the obvious choice. Not only a great music film, but a remarkable piece of cinema, too. But, I have to also pick Yellow Submarine. I have great memories of watching it with my young children, and it helped to make them all Beatles fans like their Dad.

Q: What’s next for Deconstructing The Beatles?

A: We’ve already filmed three more lectures — one on the Birth of the Beatles, one on the 1963 Beatles, and one on Magical Mystery Tour. We’re hoping to get those to theaters in early 2018. We’re planning to film additional lectures next summer, including Abbey Road.