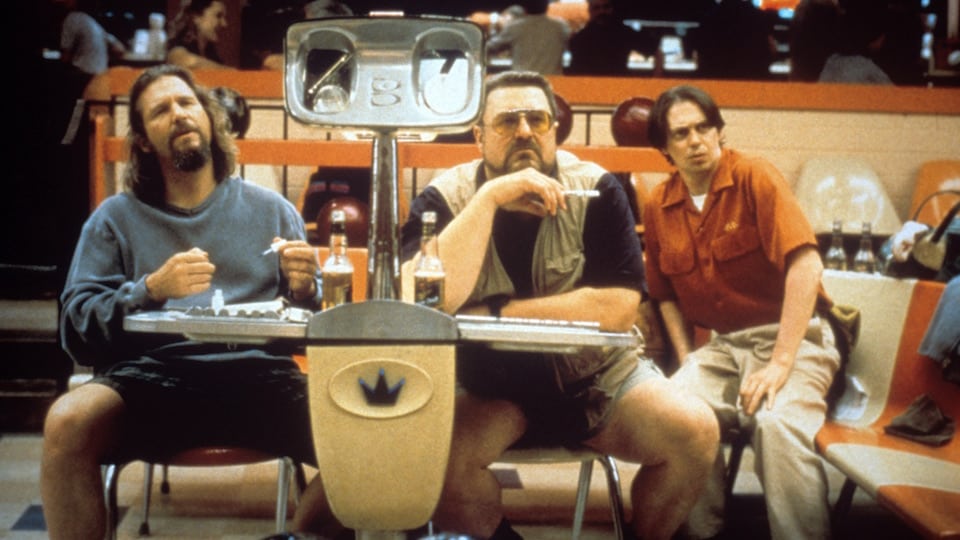 It’s been 20 years since the Coen Brothers released their stoner-noir classic The Big Lebowski. While everyone has, like, their opinion, man, on which Coen movie is the best, none has made such an indelible mark on our cultural consciousness as this tale of White Russians, bowling, crime, and a rug that really ties a room together. Part of the appeal of The Big Lebowski is its spot-on depiction of that well-known feeling of being slightly displaced; that feeling is echoed in the film’s musical selections. The Coen brothers worked with renowned producer/archivist T Bone Burnett to piece together the eclectic soundtrack. The result is a collection of songs that masterfully transports us back to a living past, without hinging it to a set time and place. Thus, the soundtrack (and the movie itself) remains timeless. Here we explore some of the movie’s most important tunes. The Dude abides.

Sons of the Pioneers’ “Tumbling Tumbleweeds” (1946)

This is the first song we hear; its lingering lilt over the opening credits underpins many important themes we’ll encounter throughout the film. Foreshadowing the tone, mood, and feel of The Big Lebowski, “Tumbling Tumbleweed” plays in the background as a mysterious stranger introduces us to Los Angeles and The Dude. The Stranger’s deep, Western voice mirrors the folksy strains of the song, and perfectly reflects the out-of-place images we see of The Dude wandering around the fluorescent purgatory that is a late-night supermarket.

Probably the most iconic song associated with The Big Lebowski, Dylan’s “The Man in Me” serves as a sort of leitmotif for The Dude as it shows up twice — once during the opening bowling scene then again when we see The Dude flying after being knocked out by Maude’s henchmen. Tellingly, the song comes from the album New Morning, written post-Woodstock as Dylan was moving away from his late-wave hippy fan base. The lyrics “Take a woman like your kind / To find the man in me” not only serve as a beautifully ironic backdrop to the average Joes we see flexing their bowling muscles but also highlight the tenderness of The Dude’s affection for his casual love interest (Maude) later on.

By far one of the most deftly chosen character-song pairings is this Spanish-language cover of The Eagles’ famous “Hotel California” with the character of Jesus Quintana, The Dude’s arch bowling-rival. Jesus is everything The Dude is not: arrogant, sartorially conscious, devoid of sincerity… But boy, can he bowl. It’s fitting then, that Jesus is given a song that exudes a creepy confidence — and created by a band The Dude loathes. T Bone Burnett once told Rolling Stone. “[The Eagles] sort of single-handedly destroyed that whole scene that was brewing back then,” just like Jesus is going to ruin the bowling league.

When T Bone Burnett was curating this soundtrack, he revealed an empathic ability to step into each character’s shoes. In an interview with Entertainment Weekly, he relayed this mindset thus: “What does Dude put on just after he’s made love?’ He’d come in, smoke a J, do a little tai chi, have a White Russian, listen to Captain Beefheart. That’s a man after my own heart.” And indeed, this is exactly what we see when “Her Eyes Are a Blue Million Miles” comes on, a song that both references Maude’s blue-green eyes and that infamous rug, with its blue diamond design, that really “ties the room together.”

This counterculture tune is introduced in the movie when Jackie Treehorne drugs The Dude with a White Russian. The narrative comes to halt, and we’re transported into the deep recesses of The Dude’s mind where a movie-within-a-movie plays out in front of us: Gutterballs. The sequence is devoid of dialogue; instead, we’re left with the sound of Kenny Rogers and The First Edition sharing a cautionary tale about drugs — suitable, considering The Dude is tripping on substances he’s been given unknowingly.

Beautifully set against the final scene (after the scattering of Donnie’s ashes) with Walter and The Dude back at the bowling alley, this lachrymose rendition of the Rolling Stones song is a fitting send-off. Van Zandt wasn’t one for doing many covers yet he came back to “Dead Flowers” many times, a song originally released in 1971 when The Stones were particularly enamored with all things cowboy and country. “Dead Flowers” was famously difficult to acquire for The Big Lebowski soundtrack since former Rolling Stones manager Allen Klein owned the rights to it. However, once Klein heard the “I hate the f***in’ Eagles, man” line in the movie, he gave his permission. And for that, we’re thankful.