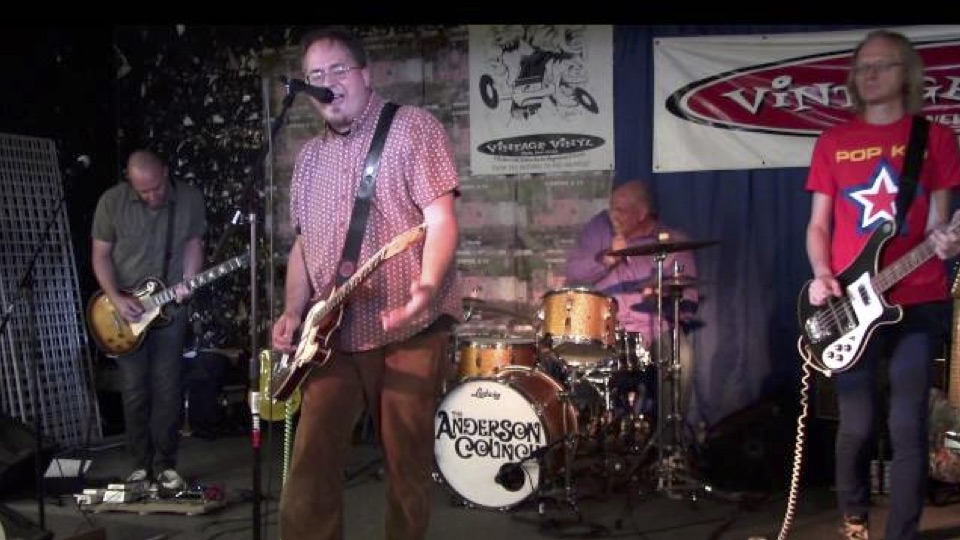 The Anderson Council is a New Jersey-based group whose music combines elements of psychedelia, power pop, and modern rock into a fantastic mélange of sound that’s gained them a loyal following since their formation in 1999. I first encountered the band when I heard their phenomenal 2011 disc Looking At The Stars, which features a collection of memorable songs ranging from the lively jangle-pop of “We’re Like The Sun “ to the spiraling psychedelia of “Gardening Man.” I’ve been dazzled by their music ever since, and their fantastic new release, Worlds Collide, is certain to gain them a whole new cadre of fans.

Related: “A Bit About Power Pop’s Past and Future”

The record literally kicks off with the sound effect of a collision, which then segues into the guitar-driven title tune, which to my ears has a strong Dave Clark Five influence. That’s not the only 1960s callback on the album. “Into The Clouds” sounds like a Sgt. Pepper-era Beatles track mashed up with some late 1960s Pink Floyd, right down to the ethereal vocals, layered production and spaced-out, trippy lyrics.

There’s also a strong Kinks-by-way-of-The-Zombies vibe on the enjoyable, character-rich entries “Lord Cornelius Plum” and “Mrs. Kirkby’s Refrigerator,” which is offered in two versions on the record, one of which features British Invasion legend Peter Noone. “How Much How Long” is an acid rock-drenched, thundering tune that features some superb work from the entire band, which consists of lead vocalist, guiding light and chief songwriter Peter Horvath, guitarist Dave Whitehead, drummer Chris Ryan and bassist Simon Burke. Horvath writes accessible, hook-filled and melodic rock and pop tunes that are delicious ear candy for dyed in the wool rock fans. He’s also capable of delivering a powerful, emotionally driven number like the epic “Amazing,” which is the centerpiece of the album. But the great songs on Worlds Collide don’t end there.

Related: “Rescuing Chad & Jeremy’s ‘The Ark’ Half A Century Later”

The tuneful pop-folk hybrids “Camden Town” and “Lads And Lasses” are very much in the vein of bands like XTC and The Posies and feature some lovely harmonies. Power pop fans will be drawn to “Grey Heavenly Lane” and “Your Devices,” while “Santa Clara,” and “Gentlemen” have a built-in alternative rock meets flower power aura. “When I Fall” and “Wrong Way Out” synthesize the British Invasion sound with some harder-edged rock and roll energy. The Anderson Council is much more than the sum of its influences. They manage to take the best parts of some much-loved genres and fuse it with their own well crafted and tightly honed songs, which sound just as good the tenth time you hear them as they do the first.

Perhaps the greatest thing about Worlds Collide (aside from the fact that it’s a truly incredible album) is that it’s a real rock and roll record in a time when that style of music often seems to get lost in the shuffle. There are so many different bands and genres of music competing for our time these days, that groups who are keeping the true rock and roll flame burning, like The Anderson Council, Ryan Hamilton and the Harlequin Ghosts, Hollow Hand and The Kurt Baker Combo, are truly deserving of support. By the way, the origin of the band’s name is sort of the flip side of Pink Floyd, who took their moniker from the first names of blues artists Pink Anderson and Floyd Council. The Anderson Council just borrowed the last names of the same artists. If you’re an adventurous music fan seeking a unique mix of classic rock sounds with a fresh and up to date spirit, check out Worlds Collide as well as the excellent previous releases by The Anderson Council.

0 comments on “The Anderson Council: Power Pop with a New Jersey Twist”