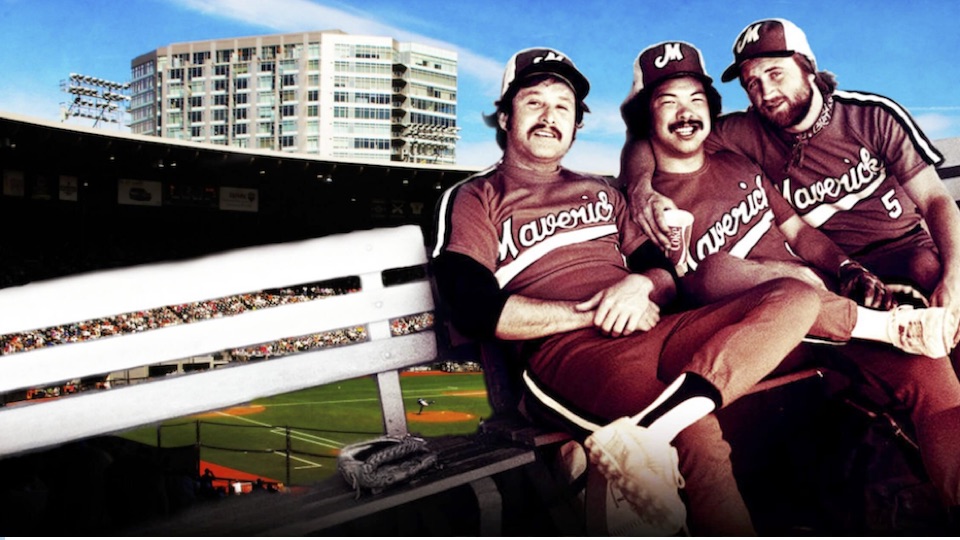 Baseball fans are still waiting to once again enjoy our National Pastime the way they always did (with beers, The Wave, and crowded stands). Or they can check out The Battered Bastards of Baseball on Netflix to re-live a time and place when the connection between player and fan was, arguably, closer than it’s ever been.

The 2014 doc tells the story of one of the last independent baseball teams, The Portland Mavericks, a group of scruffy bush leaguers MLB had either passed over or written off as has-beens. Featuring interviews with Kurt Russell, the film is also a love letter to his father, Bing, who was the Mavericks’ owner. Against considerable odds, Bing assembled a team of also-rans, who went on to do great things — chief among them, forging an indelible bond with the fans in a place most other baseball experts had abandoned.

Like his son, the elder Russell was an actor (his most notable role was as Deputy Clem Foster on Bonanza), but never enjoyed the fame or accolades his Golden Globe-nominated son would. Bing was what Kurt lovingly calls a “plumber actor”— not a star, but a guy who showed up every day to work. Bing, who passed away in 2003 at age 77, was a Dartmouth grad, a restaurateur, but first and foremost, a diehard baseball fan. As a boy, he hung around the New York Yankees’ spring training camp in St. Petersburg, Florida, and eventually served as batboy and unofficial mascot during the Bronx Bombers’ ’30s and ’40s heyday, palling around with the likes of Lefty Gomez and Joe DiMaggio. Later, Bing played professional ball with an independent club, until a wild pitch to the head ended his career.

Kurt’s mom, Louise, is also featured in the doc (Bing’s grandsons Chapman and Maclain Way co-directed). She and Kurt tell how, after Bing’s brief baseball career ended, he packed up the family in Maine and headed for Hollywood. Their neighbors, at the time, told them they’d be “back in six weeks,” but Louise says Bing went around to all the major studios, and his ability to “ride a horse” eventually landed him supporting roles in films with John Wayne and Ronald Reagan. (At Battered’s 2014 Sundance premiere Kurt Russell told Billboard magazine “Bing wanted to do two things in life: play baseball and cowboys and Indians. And that’s exactly what he did!”).

In the late 60s into the early 70s, Bing began to lose interest in the movie business just as it lost interest in him. His interest in baseball, though, only grew stronger via son Kurt’s efforts as a minor leaguer. Around the same time, further up the coast, Portland Oregon lost their semi-pro team, The Beavers. The doc explains how most minor league teams were (and still are) affiliated with Major League teams and how the latter poached the best players from those teams, leaving fans in those cities unable to make lasting connections with players. MLB also expanded its minor league farm system to monopolize the talent pool, and the number of independent teams went from 100 down to zero.

Enter Bing Russell, who, bought a license for an independent team for $500, but would spend considerably more building the squad that would become the Portland Mavericks. He was able to scout some talent through Kurt’s connections with minor league players but decided to hold open tryouts to fill out the roster. Local sportswriters were merciless in their scorn, saying that real talent doesn’t come via open tryouts but rather through drafts. But Bing told Kurt: “Let ‘em have their field day. Let ‘em chew us up; show us for the fools we are coming from Hollywood.”

The film sets up a Bad News Bears scenario, showing vintage footage of gangly, paunchy dudes stretching, jogging, and, generally, failing to shag easy fly balls. But while Bing and others expected 40 to 50 to show up, 300 came, hitchhiking their way from every part of the country — all to fulfill a lifelong dream of playing baseball. Their testimonials, revisited through local news coverage, is touching. One player tells the interviewer, “It’s the American dream just to have the chance to play.” Still another says: “I don’t care about the money; I just want to play ball” and another, “Baseball is my first love; I always got that dream that I’ll make it, but I probably have to tell myself I won’t.” Former manager Frank Peters says in the doc: “Everybody there had been rejected. People can identify with that. Bing in Hollywood felt he’d been rejected.”

But Bing would have the last laugh in Portland. The Mavs won games, broke attendance records, and garnered national attention that eventually brought Yankee All-Star pitcher Jim Bouton to the team. And they did it all with a sense of flair that endeared them to fans. Bing’s Mavericks also were the first professional baseball team to hire a female general manager (Lanny Moss) and the first to hire an Asian-American coach (Jon Yoshiwara).

Despite its forbidding title, The Battered Bastards of Baseball is a feel-good story about a ragtag group of underdogs who, for a brief moment, made the National Pastime feel like the people’s game.

-Fair use photo from Netflix

1 comment on ““The Battered Bastards of Baseball”: When Underdogs Ruled”