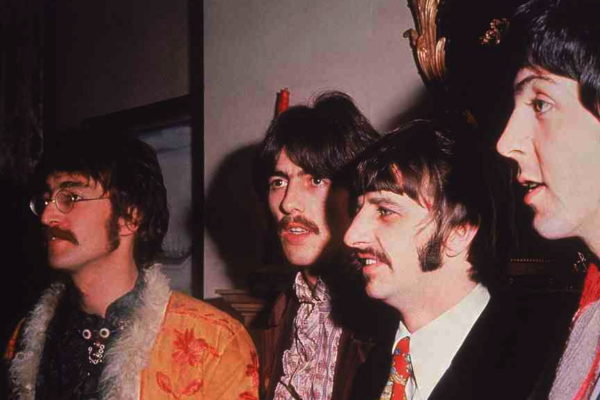 Once upon a time in 1967, a Saturday afternoon cultural showcase would broadcast from Studio 5 at ABC Television Center in Los Angeles. As dozens of teenagers awkwardly whirled around, anticipation built up to watch the latest music trends, presented by everyone’s favorite host Dick Clark on American Bandstand.

With Clark at the podium since 1956, the format and roster of performers that graced the soundstage (first in Philadelphia and then Los Angeles) was well-known and familiar. But one act that Clark could not get, the one group that in essence succeeded without his help, was The Beatles.

At this juncture, The Beatles were no longer the 1964 carefree, mop-toppy Fab Four. By their very absence, Clark’s emphasis on presenting hip ‘with-it’ pop was narrowed down to the danceable (hello…this was Bandstand) and novelty tunes (“Snoopy Vs. The Red Baron,” “Winchester Cathedral”) that dominated AM radio. So, on March 17, 1967, Clark calmly prepared the assemblage: the lip-syncing musicians, squeaky-clean teens, and Rate-A-Record would now take a backseat to The Beatles!

Clark didn’t comprehend what The Beatles had been up to in the last seven months, although he dropped hints having seen the clips before the telecast. And as American youth wolfed down Saturday morning sugar cereals and watched the juvenile, removed-from-reality Beatles cartoon, their real-life counterparts had dropped acid, become musically audacious, and created two soon-to-be masterpieces.

Back at Television Center, with his disarming avuncular manner on display, Clark began by asking a parade of teens, “Will The Monkees outlast The Beatles?” Admittedly, it wasn’t even close; The Beatles won the majority vote. Then vaguely attempting to dispel rumors that The Beatles were not breaking up (amidst the news they wouldn’t tour anymore), he introduced the promotional clips for “Strawberry Fields Forever” and “Penny Lane,” with a tone implying that the audience didn’t know what was coming.

Both clips had their maiden appearance in February on The Hollywood Palace, and the single had been released with healthy sales, to wit: “Penny Lane” was atop the Billboard music chart. But after the viewing – historically unknown if they watched both in color – the teens were equal parts dumbfounded (evidenced by the unexplained, out-of-context visuals) and confused when asked what they thought.

“They look older and it ruins their image.”

And after “Penny Lane” with some marginal clapping:

“I thought it was weird.”

“At least they smiled.”

“It reminded me of Hollywood about a hundred years ago.”

Why had they reacted so sideways? Blindsided by the odd shift in looks, and caught momentarily in the headlights of pre-adulthood, these kids were presented with something that had no previous definition. They knew this band, they looked forward to this band’s new song, but…y’know… where are our Beatles? And while Clark appeared neutral, his prodding for answers today elicits the expected eyeroll: taken at face value, his paternal conservatism reeked of scripted surprise.

Many seem to have forgotten that in the previous winter, The Beach Boys had released “Good Vibrations” to enthusiastic sales (a Number 1 hit!) and production even more adventurous than “Strawberry Fields Forever.” Yet Brian Wilson’s episodic multi-part masterwork couldn’t be challenged: The Beatles were hunkered down within the confines of EMI Recording Studios, painstakingly dismantling their past, waiting for everyone else to catch up.

The fashion choices were another contrast in acceptance. For teens –  who we’d think would be eager to emulate their idols –  the paisley prints and bold colors of The Beatles clashed with the tie and jacket-clad boys, while the facial hair (George Harrison has a goatee?), the granny glasses on Lennon and seriously somber looks puzzled the girls.

In tandem, the critical analysis and appreciation for what The Beatles were putting forth had not yet manifested themselves in print. Covering rock music as a serious entity had only just started, first with Crawdaddy in 1966 and then Rolling Stone in the fall of 1967. As teen magazines were the go-to for many kids sitting in that Bandstand audience, in practical terms there were going to be no thoughtful insights into the music at that time.

Thankfully, The Beatles couldn’t be dismissed with blunt comments about their appearance or progressive soundscapes (kudos to the guy who exclaimed, “I thought it was great!”). And naturally, it pains to hear the negative, when we know now all of us were on the precipice of something bigger to come. Both Bandstand and The Beatles would continue to influence their audiences, albeit in different ways. And if we didn’t appreciate that teen criticism, it certainly pushed beyond the accepted boundaries that still resonate with us today.

6 comments on “The Beatles and “Bandstand”: Of Mustaches and Grampa”