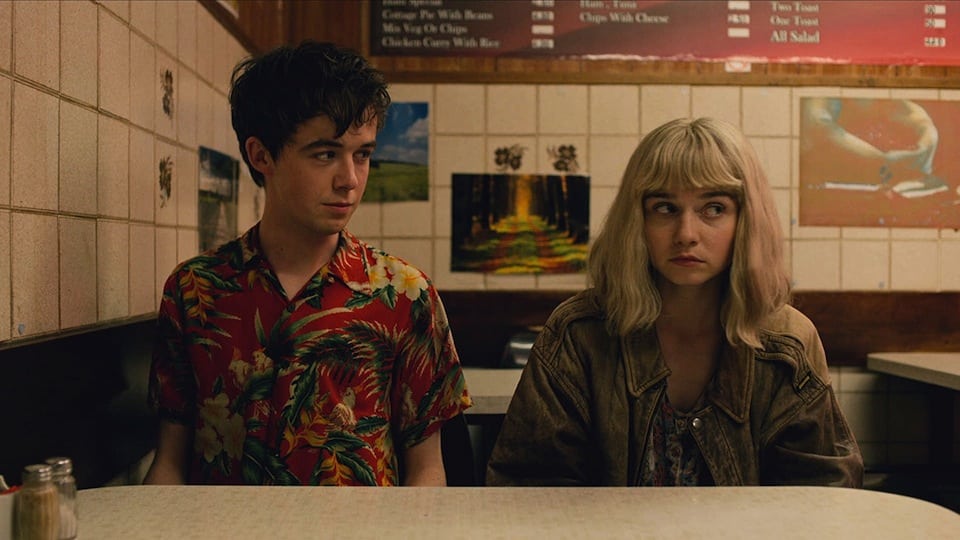 Back in February, and with much fanfare, the Paramount Network released the pilot episode of its TV reboot of Heathers, the 1988 dark comedy starring Winona Ryder and Christian Slater as Veronica and J.D., a pair of teen outcasts who team up to kill off the cool kids. The internet was not amused for a variety of reasons and within a week Paramount postponed the series indefinitely, ostensibly in lieu of the Parkland shootings. Whether Heathers fans should mourn or celebrate the loss of the reboot, here’s some good news: there’s already a British show on Netflix that captures the spirit of Veronica and J.D.’s nihilistic teen romance. It’s called The End of the F***ing World.

Seventeen-year-old weirdo James (Black Mirror’s Alex Lawther) is pretty sure he’s a psychopath. As a cover, he initially “pretends” to fall in love with Alyssa (Penny Dreadful’s Jessica Barden), a new girl in school with an attitude. Her teen rage at the unfairness of it all makes her quick to act on impulse, cursing out a waitress or smashing her own cell phone. Yet even a girl driven by this much distrust and disappointment can use a partner in crime. Oddly enough, James fits the bill. In other words, they’re perfect for each other

By the end of the first episode, James has put his various murder plans on hold, steals his dad’s car and runs off with Alyssa, who can no longer tolerate life at home. Before long, their teen angst has a body count, as they scam and steal their way across England. They’re on their way to Alyssa reuniting with her biological father whom she hasn’t seen since she was eight. Maybe he won’t be too much of a disappointment.

The eight-episode series — based on Charles Forsman’s graphic novel — looks and sounds great. Its dark subject matter is balanced by stylish production, nostalgic “happy music,” and a brisk pace: episodes average a mere 20 minutes. But what makes it all work is the remarkable chemistry of the two leads. Despite bad behavior, profanity, and one very graphic act of violence, there’s a sweetness to Alyssa and James’ budding romance. The boy who can’t feel and the girl who feels too much somehow fit together despite—or maybe because of—all their broken edges. There’s something about the way James and Alyssa discover each other as they’re discovering themselves that feels genuine to the experience of being a teenager.

Love — or the risk of losing it — really can seem like the end of the f***ing world. Will there be a second season? No one knows yet — and, given where season one ends, I’m not sure how they’d pull it off — but I hope to see more from this talented team.

Photo Credit: The End of the F***ing World pic courtesy of Channel Four.