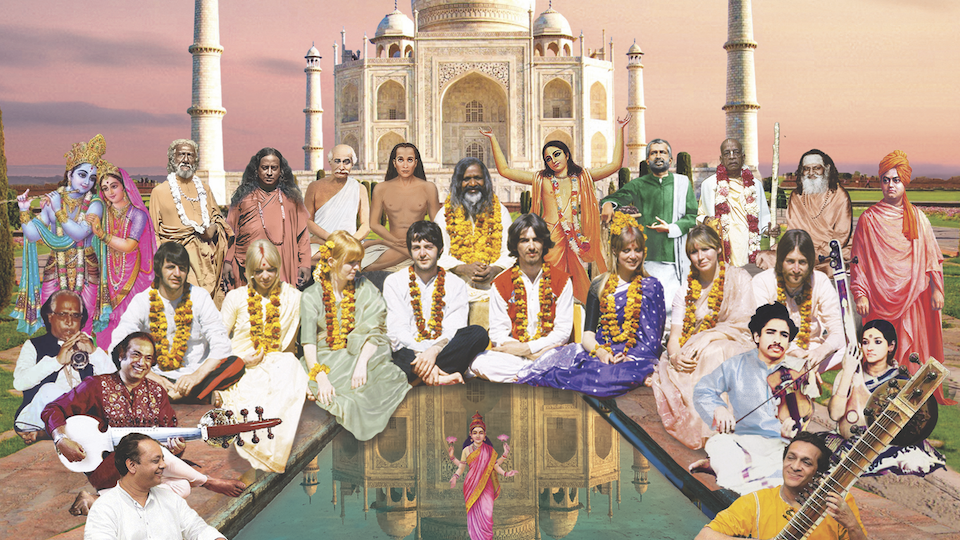 “The Hippie Revolution,” author Susan Shumsky tells us, “was not just about sex, drugs, and rock’n’roll.” And in her new book about the influence of Indian philosophy on the “music gurus” of the 1960s – John Lennon, Paul McCartney, George Harrison, and Ringo Starr – she unveils the significant impact of ashrams, meditation, and the Inner Light on The Beatles. And who would know better than Shumsky? She was there! Shumsky spent 20 years in Maharishi Mahesh Yogi’s ashrams throughout the world and served for six years on his personal staff. (Note the absence of the article “the” in front of his name. Susan explained to me that his disciples never called him “the” Maharishi…an insider’s knowledge that she acquired over two decades of dedication to the guru.)

In The Inner Light: How India Influenced The Beatles, Shumsky writes, “The Beatles grew up in my generation and subscribed (in theory, anyway) to the…Flower Power philosophy.” And using a wealth of well-researched data, Shumsky demonstrates how Flower Power, meditation, the Psychedelic Revolution, and Eastern philosophy touched the hearts of the Fab Four and indeed, changed the parameters of their music (and all music in the 1960s).

Beginning with songs and poetry of the 1950s “Beat Generation,” Shumsky takes us on a musical history tour tracing the metamorphosis of thought that would culminate in songs such as Harrison’s “Within You Without You” and John’s “Instant Karma.” As her book blurb explains, “…we discover who invented ‘Raga Rock’ (not The Beatles), [and] the real identity of rare Indian instruments and musicians on their tracks.” Shumsky also introduces us to Allen Ginsberg, Ken Kesey and the Merry Pranksters, and the late Sixties Hippie movement that beautifully water-colored the landscape of sound for a generation.

Then, Shumsky turns her attention specifically to The Beatles, starting with early tracks such as “There’s a Place.” Looking at each offering, Shumsky explains The Beatles’ ever-evolving search for significance, artfully expressed in their melodies and lyrics. She lets us in on the inside scoop, including which Beatle was the best meditator (not George), why the Beatles left India in a huff…and who Sexy Sadie, Bungalow Bill, Dear Prudence, Blackbird, My Sweet Lord, Hare Krishna, and the Fool on the Hill really are. Track-by-track, Shumsky traces the powerful influence of self-examination and self-discovery on The Fab Four.

As we take this journey with her, Shumsky explains the creative process of “tapping inner space,” as John did in the instantaneous “download” of “Nowhere Man” into his subconscious. She says that “the brilliant music and lyrics that John received in his somnambulant state – between waking and dreaming – continue to inspire generations of Beatles fans.”

Similarly, Shumsky examines the impact of Indian philosophy and the use of Raga Rock in dozens of their songs, including “All You Need is Love” – a song, she says, that Brian Epstein called “spine-tingling” and that George Harrison referred to as “a subtle bit of PR for God.” Then, as The Beatles disband and move into their solo years, Shumsky follows the impact of the Inner Light on creations such as Harrison’s Living in the Material World and John Lennon’s bold anthem “Give Peace a Chance.”

Under Shumsky’s tutelage – via the pages of The Inner Light: How India Influenced The Beatles – readers will discover Rishikesh, which Harrison identified not as “a place” but as “a new way of living.” Shumsky explores in depth the fascinating unsung contributions to the development of The Beatles by dozens of Indian musicians, including Ravi Shankar and Alla Rakha. And we are all invited to meet the real Maharishi Mahesh Yogi and trace the hidden roles of yoga, meditation, and self-discovery in the popular music of the 1960s. This book tells the whole story, without sugarcoating the truth. The research that went into this expansive chronicle of how the Beatles were influenced by Eastern music, wisdom, and culture is extensive.

In this 500-page book, replete with over 170 photos, over 130 QR codes, and stunning revelatory information, a niche in Beatles history that until now has largely been “sampled” is thoroughly investigated and brought to light. Whatever your religion, philosophy, or outlook, The Inner Light: How India Influenced The Beatles is a superb work. Even lifelong Beatles fans will definitely learn something new in this well-written, meticulously documented book. Shumsky looks at Beatle music from a singular point of view that sheds new light on what they wrote, said, and sang.

As Shumsky commented: “Using their song lyrics as a compass, this book reveals the inside story of The Beatles’ pathway through psychedelic exploration, sojourn with spiritual mentors, flirtation with Indian music, and passage to spiritual awakening. Here we will discover how the spell India cast on The Beatles changed their music and transformed the world. This book is my gift to their legacy.”

Photo: Cover image from The Inner Light: How India Influenced the Beatles

4 comments on “The Inner Light: How India Influenced the Beatles”