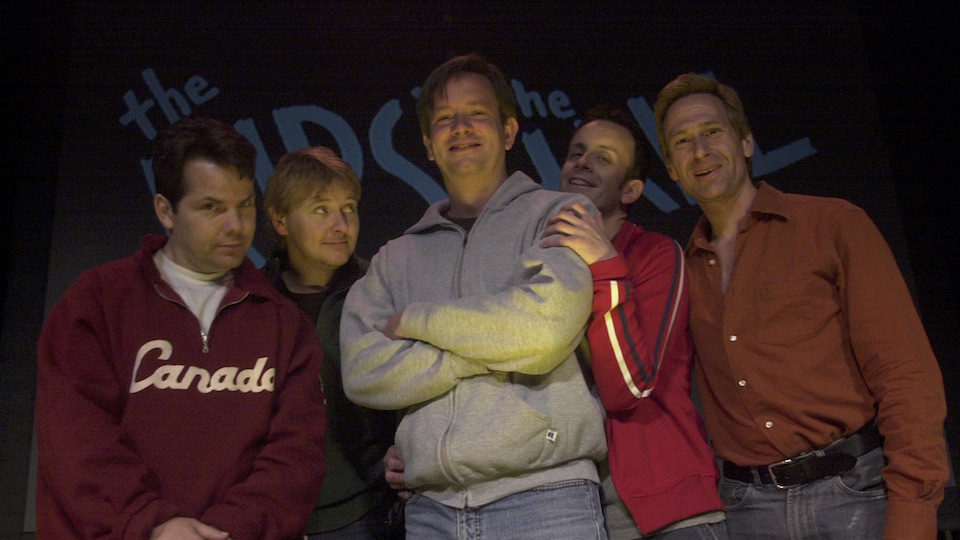 Canadian maple syrup contains a secret ingredient that makes people funny. It’s a fact. Consider the Canadian comedy troupe The Kids in The Hall who helped usher in both the alt-comedy scene of the ‘90s and the improv boom of the ‘00s. That’s a fact, too. It’s also a fact that if you’re a TKITH show fan, the “It’s a Fact girl” is way cooler than the “bee girl” in the Blind Melon video. In case you forgot though, TKITH was produced by SNL creator Lorne Michaels and debuted 30 years ago (lasting until 1995). But unlike SNL, their sketches rarely seem dated because the “Kids”— Dave Foley, Bruce McCulloch, Kevin McDonald, Mark McKinney, and Scott Thompson — rarely spoofed popular entertainment. So while TKITH may be the only ‘90s show that isn’t getting rebooted, these 10 musical sketches remind you how hard this series rocked.

Like the Beatles, the band Armada had its own struggles like when McCulloch’s drummer brings his dad to rehearsal because he knows “a thing or two about the music industry.” The result? Armada becomes “Rod Torfulson’s Armada, featuring Herman Menderchuck.”

McDonald’s character feels a bit slighted in this follow-up which finds the lead singer-songwriter sinking from Paul McCartney highs to Pete Best lows in a matter of minutes. Watch for the end of the sketch as The Dudettes clearly put their stamp on “Buttermilk Sundae.”

This performance art piece pays tribute to the misunderstood bassist — the one with sadness in his eyes and his chord structure. Nobody plays uncool for laughs better than McDonald and here we see him in all his beautifully dorky glory. Hell, even his turtleneck gets laughs in this psychedelic dreamscape.

One of McCullough’s signature characters was Bobby, a rock-loving teenager who rebelled against everything, including taking out the garbage. In this particular sketch, he’s a one-man, Tenacious D challenging the Devil himself to see who rocks the hardest. McKinney’s Satan is a pretty bad-ass ax-man, but Bobby’s two-chord mastery shows the Lord of Darkness who’s boss. Foley steals the scene however as Bobby’s mother, the quintessential 1950s housewife.

How do you poke fun at a tragedy? By asking the question, what if Buddy Holly was an egomaniacal, racist A-hole who let a drunk monkey fly the plane? Watching a bespectacled McDonald — who admittedly resembles The Sandlot’s Squint more than the rockabilly icon — you start to wonder if artists don’t need to be a little moral to justify fandom. The language gets racist here but that’s kind of the point.

The Daves I Know

Warning: The following sketch contains a song that’s a certifiable earworm. McCulloch‘s particular comedic genius is on full display in this hilarious short that spotlights his beautifully silly view of the mundane by introducing us to the Daves he knows and the Daves he hardly knows. The fact that cohort Dave Foley is never named outright but simply appears to follow McCulloch’s Pied Piper, just adds to the crescendo of absurdities.

Never underestimate the power of suited businessmen singing The Sound of Music. In this sweet vignette, a lost dog in a sterile office park complex gives all five kids a chance to dust off their musical chops for a spontaneous and contagious performance of “Do Re Mi” that would have surely made Rogers and Hammerstein scratch their heads.

Into the Doors/ Record Store Clerk

McCulloch nails the opinionated record store guy by rocking a mullet while schooling McDonald’s character on what it takes to be a Doors fan. Clearly he’s reached a stage of enlightenment which most listeners cannot comprehend. “The gypsies had no home and the Doors had no bass.” Enough said.

Let’s face it, the drummer rarely gets enough respect so McKinney’s drummer sees no reason why he can’t finish a tour without the rest of the band. Who needs Paul, John, and George, when you’ve got a narcissistic Ringo? Although, in this case, it’s more like who needs Jon Bon Jovi and Richie Sambora, when you’ve got Tico Torres. McKinney’s ‘80s rocker wig is pretty dead-on while McDonald’s mustache would’ve made John Oates shave his off.

If you think poodle mixes to be the greatest breed then you clearly haven’t seen this sketch, McColloch’s singalong worthy ode to nature’s most perfect dog, the terrier. As McCullough strolls around his “terrier town,” nothing can bring him down, (except people who put bandanas on dogs). This sketch could only come from the minds of McCullough and TKITH, as it comes with floating terriers, interesting factoids involving Napoleon, and a well-timed bass solo in a cemetery. By the time McCullough breaks into a verse in French while wearing a beret, it’s hard not to want to study Duolingo. “Go Terri-Go-GoTerri- Go Terri….er”

Photo Credit: THE KIDS IN THE HALL -3/27/02 – From left to right Bruce McCulloch, Dave Foley, Mark McKinney, Kevin McDonald, and Scott Thompson pose on stage at The Danforth Music Hall in Toronto. (Photo by Vince Talotta/Toronto Star via Getty Images)