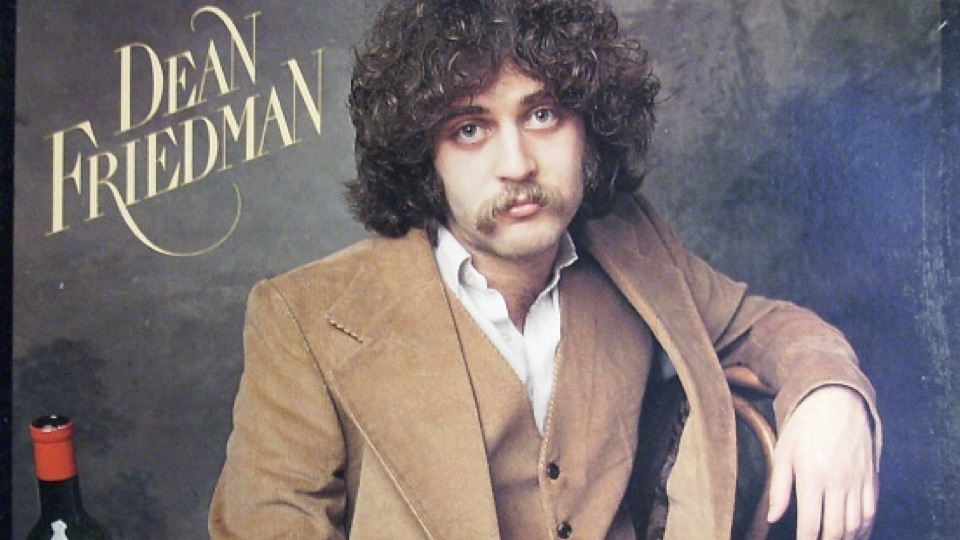 Back in the 1970s, there was a particular sub-genre of pop music that flourished on AM radio. Songs like Harry Chapin’s “Cats in the Cradle,” the Henry Gross tune “Shannon” and Jim Croce’s “Bad Bad Leroy Brown” contained touching, humorous, and sometimes offbeat stories within their vinyl grooves. One of the most enjoyable entries in the genre was singer-songwriter Dean Friedman’s “Ariel.” The infectious song, a quirky tale of a young man’s love for a Jewish girl who’s fond of wearing peasant blouses, getting high, and who also happens to be a vegetarian, was a big hit for Friedman in 1977.

Friedman was born in Paramus, New Jersey, and began playing music and writing songs in his grade school days. He bought his first guitar at the age of nine. During his teen years, he performed in a band called Marsha and the Self-Portraits, a group that played weddings and bar mitzvahs. While attending City College, he took a course with the noted folk guitarist David Bromberg, who helped the young artist land a management deal. Friedman later signed with Lifesong Records, a label founded by Terry Cashman and Tommy West. Lifesong released Friedman’s self-titled debut album in 1977.

Dean Friedman, an eclectic collection of tunes, features Friedman’s off-center sense of humor, and also displays his knack for writing lovely, heartfelt songs such as “The Letter” and “Song For My Mother.” The track that really took flight on the radio airwaves was “Ariel.” One of the things that makes the song memorable is Friedman’s keen eye for detail. The lyrics feature references to things that were quite familiar to New York area listeners of the era, including the waterfall at the Paramus Park Mall, radio station WBAI, and late night-movies airing on local station Channel 2. “Ariel” is like a time capsule of the bygone era of the 1970s, including the singer’s shout out to the television station’s national anthem sign off during a make-out session with the girl of his dreams.

“Ariel” got quite a bit of airplay in 1977 and spent 22 weeks on the Billboard charts. The song ended up being Friedman’s only hit in the US. His subsequent albums, including “Well, Well,” Said The Rocking Chair and Rumpled Romeo, also featured well-crafted songs, ranging from singer-songwriter style tracks like “Lydia” and “Love Is Real” to the more humor-laced and satirical “McDonald’s Girl” and “S&M.”

Friedman had better luck in the UK, where the track “Lucky Stars” a duet with Denise Marsa, was a significant hit. The songs “Lydia” and “Woman of Mine” also charted across the pond. “McDonald’s Girl” was actually banned by the BBC because it mentioned the name of the fast-food chain in its chorus. Many years later, McDonald’s actually licensed the song for use in an ad campaign.

Friedman has continued to record and perform and has also composed music for films and television. In addition to his albums and live performances, he’s written and sang a number of advertising jingles. Friedman embraced the concept of fan funding for his music relatively early on, using it for his albums The Treehouse Journals (2002), Squirrels in the Attic (2005), and 12 Songs (2017). Artists such as Barenaked Ladies, Ben Folds Five, and Ariel Pink have covered Friedman’s songs and acknowledged him as an influence. “Ariel,” a throwback to a more innocent time, can still get stuck in your head when you hear it, but the rest of Friedman’s catalog is also well worth a listen.