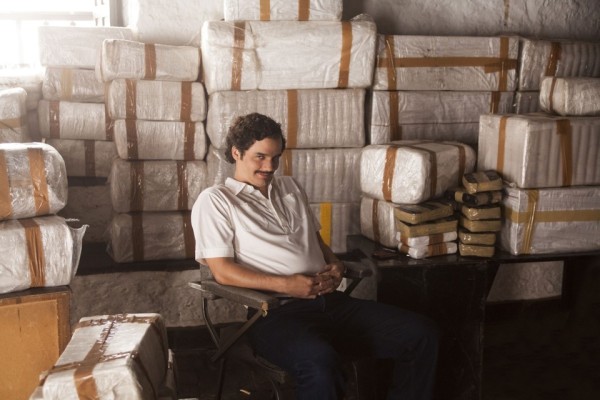 In light of recent news of the recapture of Mexican drug lord, Joaquin Guzman, aka El Chapo, I feel it’s time to come clean. Ever since the first season ended of the Netflix original series, Narcos, about the rise and fall of notorious Colombian drug kingpin, Pablo Escobar, I have had a sick fascination with everything “cartel.” That the two men share similar character traits and modus operandi is no surprise but, credit where credit is due: Pablo Escobar is hands-down the baddest bad guy of all — the king of corruption, the duke of drug trafficking, the prince of political unrest. El Chapo simply took a page from his book.

The Colombian Escobar is described in various romantic and old-fashioned terms as a bandit, an outlaw, and a rogue. He was, in truth, a ruthless man whose ambition, political savvy and penchant for violence created the world’s first and largest narcotics cartel and made him one of the most feared and hunted criminals of all time. With his share in the Medellin cartel estimated by Forbes at a net worth of $3B in 1987 (adjusted for inflation, that’s over $6B today), Escobar was listed among the 10 richest men in the world. He had so much money that he literally buried it in barrels for lack of storage. He had so much money that it is rumored that he once offered to pay off Colombia’s national debt in return for amnesty.

In a June, 2011 Forbes article, the DEA designated the Mexican El Chapo as the “leading drug trafficker of all time” because his product line expanded from just cocaine to meth, weed and heroin, and his reach extended beyond the US to Europe and Asia. But, in 2012, Forbes estimated the net worth of his Sinoloa cartel at a mere $1B and, in 2013, dropped him from the Billionaire’s list altogether because he was burning through so much of it to protect himself from capture and to escape imprisonment.

In violence committed and havoc wreaked, Escobar is peerless. While El Chapo is no altar boy — he is believed to be responsible for thousands of violent deaths — Escobar had that many under his belt and then some when his tactics devolved into straight-up terrorism. In an effort to coerce the Colombian government into voting against the extradition of suspected drug traffickers to the US, he orchestrated the 1985 siege of the Palace of Justice where 25 Supreme Court Justices lost their lives. In November 1989, he ordered the bombing of Avianca Air flight 203, erroneously believing the Minister of Justice to be aboard, killing all 107 passengers and crew. And in December of that year, he masterminded the take-over of the Colombian DAS building (Department of Security), where 45 people were killed and over 400 injured.

These guys were hardly bothered by attempts at law enforcement.  El Chapo made a name for himself for his elaborate prison escapes through $1M air-conditioned tunnels. But Escobar literally built his own prison, guarded by his own men, and continued to run his empire from within, safe from harm at the hands of his cartel enemies. (When push came to shove, he too eventually escaped through a tunnel.)

You’ve got to hand it to both of these guys; they didn’t think small. Leaving aside the staggering acts of violence, murder, terrorism, torture, and kidnapping, and the thousands upon thousands of people who died as a result of their introduction to highly addictive, lethal narcotics, the vast business empires these men created are studies in mind-blowingly complex operations and systems. But Pablo Escobar was the first and the best, and set the stage for all that came after.

If you have read this far, you are clearly a Cartel Junkie too and should immediately begin binge-watching Narcos. You can also read Killing Pablo by Mark Bowden (author of the acclaimed Black Hawk Down). If you still haven’t gotten enough, hit up the myriad B movies made about his life. A notable, highly fictionalized one being Escobar – Paradise Lost, starring Benicio del Toro in the title role, structured around the inexplicable conceit of a American surfer dude becoming involved in the Medellin Cartel by way of falling in love with Escobar’s niece.

To date, the only way to become immersed in the intimate life of Joaquin Guzman is a steady diet of news reports, which should continue to be plentiful since he will likely be extradited to the US for trial. The closest we’ve come to a pop culture look into his life is Sean Penn’s now-infamous interview in Rolling Stone, which is widely believed to have taken place in service to El Chapo’s Hollywood ambitions. Who knows? A vanity biopic just might get the green light before he makes it to US soil.

PS.  While we’re on the subject of compelling new series, you might enjoy our posts The Doofus Hero: The Classics Never Get Old, French Zombies: Now with Extra Ennui and Now THAT Is Our Idea of a Musical!

1 comment on “Is It Wrong That I’m Obsessed With a Narco Terrorist?”