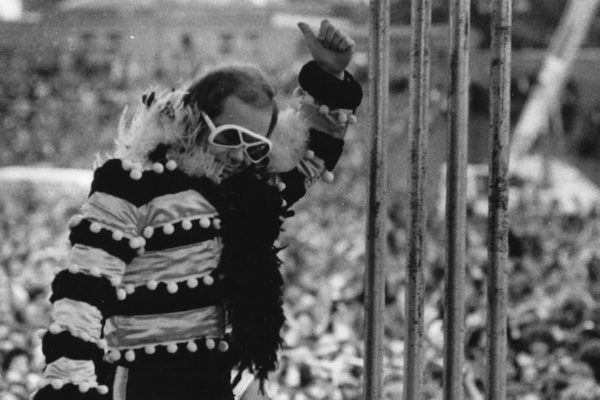 If you’re a longtime Elton John fan, you certainly have a favorite album or two, or three. During the 1970s, Elton had an incredible run of amazing records. Standouts include Tumbleweed Connection, Captain Fantastic & The Brown Dirt Cowboy, and Madman Across The Water. I’ve always appreciated Elton as an “album” artist, though he’s had huge success with his singles as well. One of the discs that sometimes gets slightly lost in the shuffle is the 1973 release Don’t Shoot Me I’m Only the Piano Player, which came out between Honky Chateau and Goodbye Yellow Brick Road. It’s a fantastic effort that features a number of excellent songs. At the time of its original release, it spawned a couple of massive hit singles in “Daniel” and “Crocodile Rock.”

The record was made at Château d’Hérouville in France, where the band had recorded Honky Chateau. Don’t Shoot Me finds Elton and lyricist Bernie Taupin continuing their creative hot streak. Bernie’s vivid imagery and Elton’s tuneful music are the perfect match. Kicking off with the classic ballad “Daniel,” the album features an eclectic mix of tunes, including the rollicking, Stones-esque “Midnight Creeper” and the powerful “Have Mercy On The Criminal,” featuring strings arranged by Paul Buckmaster who had collaborated with Elton on some of his previous albums. There’s also a tribute to Elton’s friend Marc Bolan of T-Rex on “I’m Going To Be A Teenage Idol.” Of course, the supremely talented band consisting of Davey Johnstone on guitar, Dee Murray on bass, and Nigel Olsson on drums, backs Elton on the album, and they rocked, as they always did when backing Elton, whether it was live or in studio.

Other notable tracks include the rocking “Elderberry Wine” and the bouncy “Teacher I Need You.” Of course, it wouldn’t be an Elton record without some slower-paced, ballad-style numbers and the beautiful “Blues For My Baby and Me” and the tender “High Flying Bird” are also standouts. Don’t Shoot Me I’m Only the Piano Player is probably Elton’s most straightforward pop album up to that point in his career, and it’s a very well-crafted record, impeccably produced by Gus Dudgeon. In re-listening to it, I’ve realized it truly stands up alongside some of his best work. It may not quite reach the heights of Tumbleweed Connection, Goodbye Yellow Brick Road, or Captain Fantastic, but it’s a solid effort in its own right.

PS. For a look at some other albums we’ve been giving a second look, check out our posts Paul McCartney’s “Ram” Reconsidered and Joni Mitchell’s “Hejira”: An Underappreciated Masterpiece.