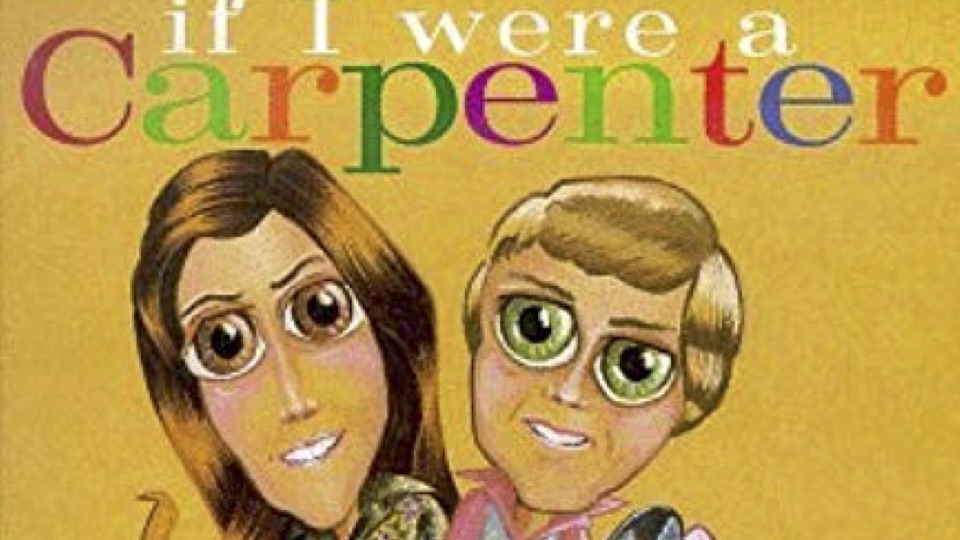 Aside from being the era that saw the rise of rock bands such as Nirvana and Pearl Jam, and pop acts like Hanson and the Spice Girls, the 1990s was the time that an explosion of tribute albums flooded record store shelves. Numerous all-star compilations honoring the music of artists like Elton John, Leonard Cohen, Charles Mingus, Led Zeppelin, Curtis Mayfield, and Jimi Hendrix all appeared during the decade. One of the more intriguing projects to be released among this plethora of homages was If I Were A Carpenter, a musical paean to the sibling duo that ruled the AM pop radio airwaves for much of the 1970s. They recorded tunes from top songwriters like Paul Williams, Burt Bacharach, Neil Sedaka, and Carole King. The Carpenters scored numerous hits, which centered on Karen’s lovely and expressive voice and Richard’s multi-layered arrangements.

If I Were A Carpenter features a group of alternative rockers sharing their renditions of a number of Carpenters classics. Veteran producer Matt Wallace and music journalist Dave Konjoyan, who both have a long-time love and admiration for the music of The Carpenters, initiated the project. Many of the bands featured on the disc grew up listening to The Carpenters and were excited to be part of the album. Grant Lee Phillips, aka Grant Lee Buffalo, who covers “We’ve Only Just Begun,” has spoken of his appreciation for The Carpenters music (and Karen’s unforgettable voice) in interviews, as have some of the other artists involved with the disc, including Johnette Napolitano of Concrete Blonde. It’s tough to make such iconic songs your own, but that’s just what bands like Redd Kross, who amped up the vibe with their cover of “Yesterday Once More,” manage to accomplish on this eclectic collection.

Highlights of the album include American Music Club’s stripped-down take on “Goodbye To Love,” and Bettie Serveert’s guitar-driven version of “For All We Know.” There’s also an energetic, pop-rock infused run-through of “Top of the World” by Japan’s Shonen Knife. The Cranberries provide a faithful version of “(They Long To Be) Close To You” while Sheryl Crow brings out the emotion in her lovely cover of “Solitaire.” Cracker turns in a stark rendition of “Rainy Days and Mondays,” which fits the melancholy tone inherent in the song’s lyrics. One of the most remarkable and striking tracks on If I Were A Carpenter is Sonic Youth’s dark-hued reading of the Leon Russell-Bonnie Bramlett tune “Superstar.” It’s a knockout rendition of this oft-covered song, which illustrates that a great tune can stand up to many styles and interpretations.

If I Were A Carpenter even features a cover version of a song the Carpenters covered, as Babes in Toyland take on “Calling Occupants of Interplanetary Craft,” originally recorded by the Canadian rock group Klaatu. Perhaps the ultimate stamp of approval given to the project is that Richard Carpenter himself plays keyboards and provides backing vocals on Matthew Sweet’s beautifully done version of “Let Me Be The One.” At first glance, or even first listen, this album might seem like an odd pairing of styles, but the contrast of the often low-fi, occasionally harder-edged approach of the bands on the disc with the lush pop sounds of The Carpenters really clicks. Some tribute albums feel like hastily assembled collections of stray cover versions and B-sides thrown together to cash in on a celebrated artists’ name and reputation, but If I Were A Carpenter was obviously crafted with a true appreciation and love for music of The Carpenters, and that’s why it’s still worth listening to over 25 years after its original release.

3 comments on ““If I Were A Carpenter”: An Unlikely Tribute Album”