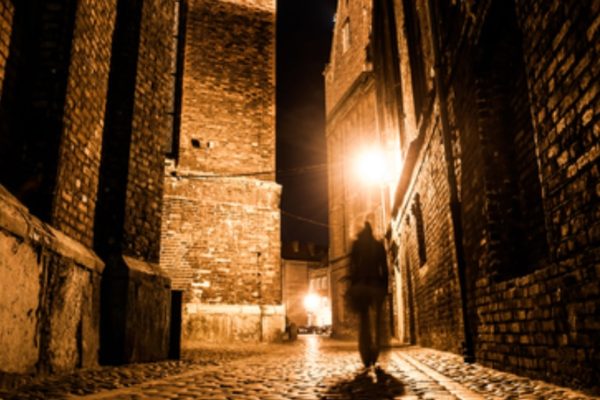 Is it his still-unknown identity? The brutality of his crimes? The catchiness of his name? Whatever the reason, London’s most infamous serial killer Jack the Ripper has made his way into pop songs of all styles for many a year. The killer’s name originates from a letter written in blood red ink from a person claiming to be the man behind the notorious murders in the East End. And although his crimes date back over 100 years to 1888, his nom de plume has been invoked in music in a variety of manners right on up to the new millennium. Below we look at references to Jack the Ripper in music. Compare, contrast, and get the chills.

1. Link Wray’s “Jack the Ripper” (1961)
Legendary guitarist Link Wray isn’t narrating the horrific history. Not in any conventional way. But his instrumental surf guitar piece definitely conveys a sense of danger and even the feeling of a chase which only grows more dramatic as the drums simulate a heartbeat at one point in the song. The B-side of the single, “The Stranger” (also instrumental), has a much lighter touch as if to capture of the innocence of Jack’s victims before their fateful encounters in a shadowy side street.

2. Screaming Lord Sutch’s “Jack the Ripper” (1964)
The Official Monster Raving Loony Party founder released this single with an image of himself in full cape and top hat, as if he were ready to spring from a dark alley just like his song’s diabolical namesake. Sutch’s song was eventually banned by the BBC and in 1988, a public outcry persuaded RCA/Ariola to cancel a remake Sutch had planned to commemorate the centennial of the murders. That hasn’t stop a number of covers happening from such artists as The White Stripes, The Gruesomes, The Horrors, The Fuzztones, and a host of other bands. Jack the Ripper lives on.

3. LL Cool J’s “Jack the Ripper” (1987)
Now here’s a fresh take. LL Cool J identifies himself as Jack the Ripper in his hip hop diss of Kool Moe Dee whose 1987 album cover for How Ya Like Me Now features the latter rapper grinning while standing in front of a Jeep, with a tire crushing a red Kangol hat – LL’s signature item. Indeed, Moe Dee’s whole album is littered with accusations of LL being an over-hyped rip-off artist. LL Cool J, for his part, fought back with the Ripper-like intensity as he sliced away at Moe Dee’s rep, calling him “washed up” and a copycat trying to latch on to LL for attention.

4. Morrissey’s “Jack the Ripper” (1992)
While not as well known as his song with The Smiths, “Suffer Little Children,” which was inspired by Manchester’s Moors murders in the early 1960s, Morrissey’s “Jack the Ripper” also has a serial killer at its core. With a strong guitar component reminiscent of The Smiths’ prime days layered with what almost sounds like wartime alarm, the song revels in the despair of a lover, a predator, and a victim at the same time.

5. Motorhead’s “Jack the Ripper” (1992)
None other than drummer Tommy Aldridge makes an uncredited appearance on this track from Motorhead’s tenth album, March or Die, and the beat definitely drives the band’s heavy metal look into the past, a cautionary tale that seems to suggest that if Jack has designated you as his next victim, then you’re pretty much doomed. The advice “Don’t’ give into panic, don’t you run an’ scream” still can’t prevent a final unwanted conclusion: “You’re bound to lose.”

6. Volbeat’s “Mary Jane Kelly” (2016)
The Danish heavy metal band Volbeat took a novel approach and released a song named after the woman believed to be Jack the Ripper’s fifth and final victim – “a violet plucked from mother’s grave.” Lead singer Michael Poulsen has stated that the song is focused neither on the grisly murder nor on her killer so much as it’s a portrait of the person she may have been. It’s an unusual perspective to have taken. While the lyrics certainly refer to how her life ended – “Your light was taken by the killing knife” – they’re really more about an ill-fated prostitute’s life.

Headed to London? For more stories about this sinister serial killer, the Jack the Ripper tours can take you back to East London during his bloody reign of terror. Bring your own Spotify playlist.

0 comments on “One of the Strangest Muses in Pop History”