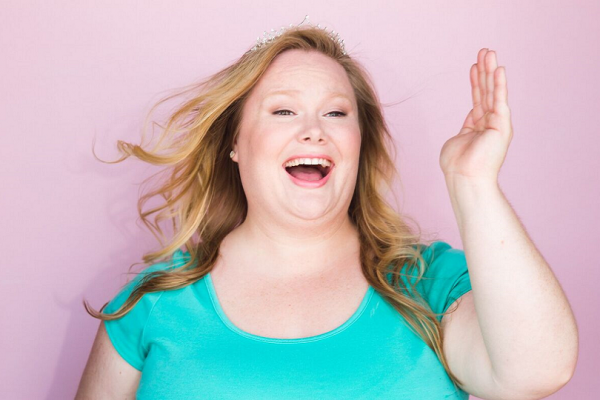 While she’s not a household name yet, trust us: You already know actor Jen Ponton. She’s guested on 30 Rock, Blue Bloods, Unbreakable Kimmy Schmidt, and The Good Wife to name a few. Now, with her leading role as Franny in the indie rom-com Love On The Run, she is finally the center of attention. In a world where so few women of size are ever cast as a romantic lead, and as a body positivity activist and plus-size actress, Ponton is relishing the chance to slash stereotypes and change the narrative. CultureSonar had a chance to chat with her about her new movie, the body positivity movement, and how she took her career to this point.

Q: Tell us a little about your background. How did you start as an actor?

A: Well, I’m from New Jersey. Which as anyone who is from Jersey knows, it means you grow up knowing you can do things in New York…and not actually have to move to New York. So I grew up going to Broadway shows and dreaming of being on stage, but never far from the sticks. I loved that, because I’m a country bumpkin at heart. I never really had an “aha” moment about acting, because I sort of burst forth from the womb singing and performing and wanting to make people laugh.

And right after college you started working as an actor?

Yes. I stayed in Jersey, and would commute to the city. I had this teeny tiny crappy apartment, and I would do children’s theatre and off-off-off-broadway…None of it was big, but everything was paying me sort of piddly money, and because my apartment was so cheap, I was basically earning my living…Finally I got to a place where I had to stop and reassess: “Ok, what are we doing? And what do you want?”

[amazon template=right aligned image&asin=B01KYFOJ70]Q: And that’s when you started focusing on film?

A: I had sort of put off this dream of having a sitcom, and being on a TV comedy because it seemed so far away. But I decided, “OK, let me focus on that” and in this sort of crazy, universe aligned way, that was when I booked 30 Rock. It was my first big TV job, and then things kind of just took off from there.

Q: When did your body positivity journey start?

A: Well, I’ve always been a person of size. I had had disordered eating on and off throughout high school and college, and I really beat myself up…I was always trying this diet or that diet. Similar, I think, to what most [larger women] go through. It was never truly terrible where I hated my life or anything, but it was definitely a huge part of how I saw myself. And then, I’d say about a year after college, I found the Fatosphere. It was an assembly of blogs and writers like The Rotund by Marianne Kirby, Shakesville, Kate Harding who used to run Shapely Prose, and I was introduced to this huge community of (mostly) female fat adults who were saying things I’d never ever heard. Saying things I could relate to. And I was like, oh my God I don’t have to think I’m worthless? I can actually embrace this? I can love myself? It was just so illuminating. I basically took an unofficial masters in the Fatosphere…This whole world, thank God, became part of my life at the very beginning of my career, and my goal, early on, became “why does size even have to matter?”

Q: So, along comes Love on the Run. I think what’s great about your character Franny is that her weight is not a story requirement.

A: Yes!…Aside from a few small comments in the film, the character and story of Franny is not size dependent. The people–straight-sized people–who wrote and produced the film were doing that on purpose. Our director Ash Christian had also directed Fat Girls with Ashley Fink, so he was someone who had already stood up the status quo in that way. There was an incredible amount of acceptance, normalizing, empathy, and compassion on set. But you better believe when I saw that breakdown, I thought, “Oh my God I have to play this character!”

A: I definitely think about that. When do we stop politicizing it so we can just get back to doing the work? And honestly I’d argue I wasn’t being brave. The only thing I was worried about with that scene was because it’s really f*%king awkward to grind your pelvis on someone else’s with a sheet between you, and a camera there! But I get why people are saying [it’s brave]…I’ll take it on because it certainly would have felt brave years ago. But I do look forward to the day it’s un-comment worthy.

Q: Can you tell me about your web series.

A: It’s called The Weirdos Next Door. It’s sort of a hybrid of Full House and The Muppet Show in this ’90s-feel family sitcom. It stars me and a bunch of puppets. I play the romantic lead, and in 4 seasons, over 50 episodes, there’s never been a single comment on my size, at all, ever. It’s sort of where I get to exercise my utopian dream.

Q: Finally, I have to ask: Have you been asked any tone-deaf questions about being a woman of size, or even just a woman in film?

A: Nothing has given me a rage stroke yet! But I think it’s because, thankfully, most of the people I’ve spoken with are already on the same page…I guess there are those occasional comments from someone in the more mainstream media who is well intentioned, but just doesn’t know…the vocab, y’know? Like, embracing the word fat…We’re still a pretty small, sort of niche movement at the moment, so just realizing it’s not an “in spite of” it’s a “yes, and.” I will say, I think it’s promising, that 75-80% of the roles that I book have nothing to do with my size…The needle is moving up.

You can watch Love On The Run on Amazon Prime, iTunes, or on demand with DirecTV and Dish Network. And keep up with Jen on Twitter @JenPonton.

Check out Celey’s podcast Still Got It for more from Jen Ponton.