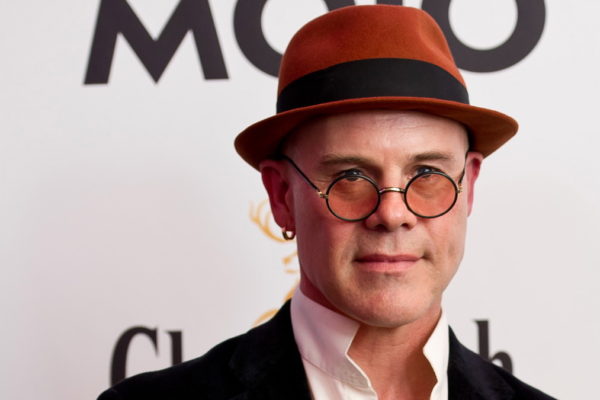 The problem with the label “one-hit wonder” is that it carries an undertone of dismissiveness. This is particularly noticeable when applied to artists whose moment of pop success is atypical of their overall body of work. However one defines the category, the label seems especially ill-suited to Thomas Dolby. Dolby made this remarkably clear with his appearance at the  Intervention7 event. Taking place in Rockville, Maryland – not far from Johns Hopkins University where he’s a member of the faculty — Intervention is an annual celebration of the creative arts with an enticing lean towards technology and science-fiction media. Dolby fit the event perfectly — and not just because he’s adept with synthesizers and by his own account watched the iconic science-fiction series Doctor Who as far back as 1964. His presentation, which was followed by an enjoyable Q&A and punctuated by a musical performance, was a case study in adapting your creative talents to a changing cultural environment.

Though he directed the audience to his memoir The Speed of Sound for anecdotes such as his Live Aid performance with David Bowie, Dolby offered plenty of background about his early days in the music business. Many of his later endeavors have been a step removed from that world, but this phase clearly informed much of what came after. Understanding that he developed the visual concept for “She Blinded Me With Science” before coming up with the song that fit it so perfectly makes it clear that he’s not enslaved to conventional approaches.

The same commitment to following his own path led him to start his own Silicon Valley tech company Beatnik in the early-’90s. Not surprisingly, the company focused on the technical challenges of delivering music online. The work with Beatnik in turn led to him working with Nokia in the ’00s on one of contemporary life’s most ubiquitous manifestations of digital technology: the mobile phone ring-tone. Not one to overstay his welcome in any endeavor, a move to the East Anglia region of England several years ago dovetailed with a return to music, albeit with a different approach than his 1980s work.

Dolby had arguably been among the first to understand that the music business as it had existed was fading in both relevance and substance. At the very least, he understood the shift better than those within the industry who, as he described it, couldn’t understand why so many consumers were reluctant to pay $0.99 for an actual song but would pay significantly more for a low-quality excerpt in the form of a ring-tone. Rather than just releasing a traditional album, he decided on a method of presenting new music for a media environment where social networking and gaming are dominant forces.

Set in a post-apocalyptic alternate history, the game A Map of the Floating City unfolded over three months in 2011. While the conclusion was somewhat undercut by a technical mistake on Dolby’s part, he seemed genuinely proud of the game, which enabled significant player interaction, and the music that accompanied it (recorded on a boat-based studio, no less). Songs like “Spice Train,” which use sound to great effect, make it plain that his musical curiosity is undiminished.

The through-line for Dolby’s public life is that each step is very different but also connects to what’s come before. This holds true for his entry into what he calls “the family business.” Both the son and grandson of Cambridge professors, he was appointed Johns Hopkins’ first Homewood Professor of the Arts in 2014. Since then he’s taught classes about sound in film and generally worked to make the university’s film program more focused on the practical aspects of filmmaking, as well as pushing for more outreach to local schools whose students often don’t have access to arts instruction.

For all those wondering, yes, he played “She Blinded Me with Science.” If Dolby has any ambivalence about the prospect that he’ll be remembered mostly for this wonderfully off-beat song, it didn’t show in his performance. Self-deprecating at times and incisive at others — but always wry — Dolby is a forward-looking artist who isn’t afraid to look back.

1 comment on “The Professor Will See You Now: The Many Lives of Thomas Dolby”