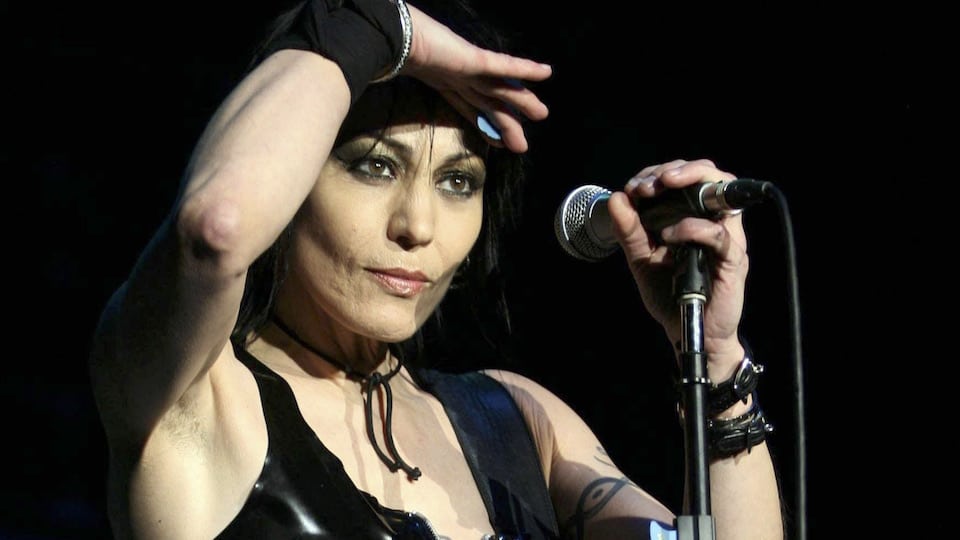 You don’t step on Superman’s cape. You don’t mess around with Jim. And you don’t tell Joan Jett that there’s something she can’t do, especially if that’s rock n’ roll. So if you’re a music fan with a pulse, it’s tough not to get excited by the trailer for the upcoming Joan Jett documentary Bad Reputation (which comes out in Sep. 2018) because before Karen O and Florence + the Machine, Sleater-Kinney and Bikini Kill, L7 and Alanis Morrissette, there was trailblazer Joan Jett rocking hard onstage with her electric guitar and paving the way for these very talented women.

Everything about Joan Jett is iconic. Her black leather outfits. Her jet black hair. Her whole pure punk look. Even her fierce stage presence. So while it’s safe to say that there was never a time when Joan Jett wasn’t cool, there was a time when the world hadn’t known it yet. Of course, that time was brief. She started The Runaways with the late Sandy West while both were teens circa 1975. And the world learned pretty quickly.

Sure, the rise and fall of The Runaways has been told already in that 2010 feature film starring Kristen Stewart as none other but we’ve always suspected that there’s nobody better to tell Joan Jett’s story, then Joan Jett herself. For with all due respect to Stewart, Jett lived through the all-too-real struggles of being a female guitarist and a frontwoman fighting to make it in the “Boys Club of Rock.” When music critics refused to take The Runaways seriously and mocked their glam look, she didn’t stop either. “You were always one foot in the gutter and one foot in possible stardom,” she quips in the trailer instead.

When The Runaways broke up, Jett’s future seemed up in the air. But then she teamed up with songwriter Kenny Laguna and released her still-irresistible debut album Bad Reputation. Because no record company was clamoring to release a new rock album by a female guitarist, who dressed and sounded like “Joanie” Ramone more than Joni Mitchell, she and Laguna (who became her producer-manager) formed their own label out of necessity: Blackheart Records. It wasn’t easy either. In a 2015 Guitar Center Sessions interview, Jett talked about how she and Laguna would sell the records out of the trunk of her car after shows. Remember, this is post-Runaways.

Uninterested in being a solo act, Jett simply formed another band — The Blackhearts — which have proven to be the lifeblood of Jett’s musical heart ever since. Her cover of “I Love Rock n’ Roll” was a smash hit in 1982; her brand of kick-ass rock made lifelong fans of the MTV generation.

When punk fell out of fashion in the late ‘80s and new wave morphed into synth pop, Jett was still putting out great music. When ‘90s grunge toppled hair bands, Joan was still touring, albeit in smaller clubs. When Courtney Love was talking about being a rock star, Jett and the Blackhearts were busy performing their hits and building new fans. Her 1997 release Fit to Be Tied: Great Hits by Joan Jett and the Blackhearts may have led to her sporting a blonde buzz-cut for a few years but she somehow made that seem as iconic as the rocker look she’d already owned. Interestingly, despite the punk attire, Joan has never labeled her music as such. Her music choices and compositional inspiration are all about songs that are “fun to play, with a message,” she told MTV Live during a 1997 interview.

Related: “The Bluebonnets: All Girl Band Blooms In Texas”

“I Hate Myself for Loving You,“ “Bad Reputation,” “Do You Wanna Touch Me (Oh Yeah)”, “Light of Day” and much of the rest of Joan Jett’s catalog are all fun and do have a message, so clearly she knows what she’s doing. What further sets her apart from other bands born in the ‘80s is that they’ve never stopped playing with a ferocious energy. Attending a Blackhearts show in the ‘10s is just like attending one in the ‘00s or the ‘90s or the ‘80s. She still attacks the guitar with the fierce concentration of a teenager; she still has that perfect rock voice that can get you hopping up and down in excitement.

There is something about hearing Jett wail out “Yeah… I’m not such a sweet thing, I wanna do everything” in such a beautiful, yet bad-ass way that still gives me goose-bumps personally. It also reminds me that Joan is one of those rare artists that can make every song she covers her own. Why shouldn’t she do the improbable and record a version of “Love is All Around,” the theme to Mary Tyler Moore? That song is fun to sing and has a message. Who can turn the crowd on with her smile and a sexy snarl? Joan Jett, that’s who!
(https://www.youtube.com/watch?v=mHZBBNRrano)