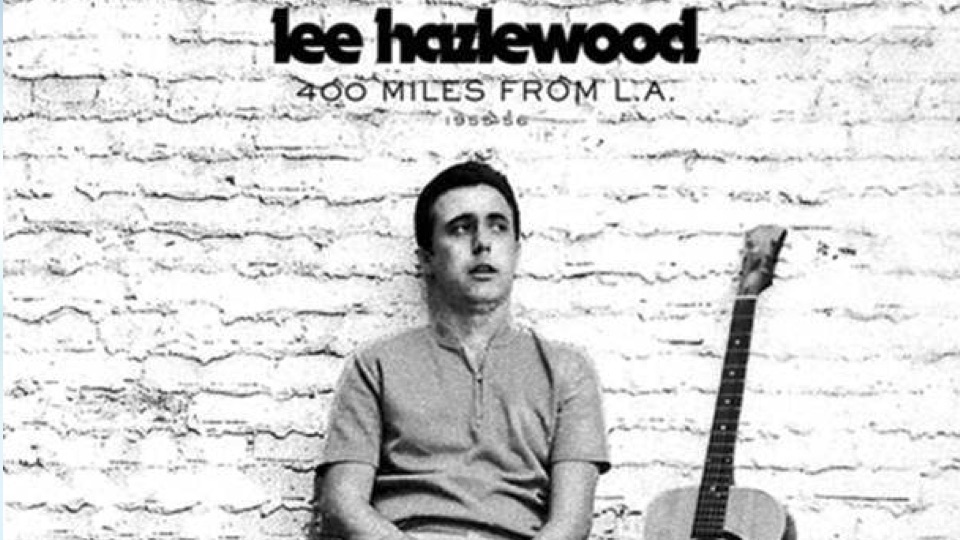 Lee Hazelwood is perhaps best-known for his production work with artists including Duane Eddy (“Peter Gunn”) and Nancy Sinatra (“These Boots Are Made for Walkin'”).  But there is so much more to the career of this gifted country-rock tinged singer/songwriter/producer.  A new release showcases the breadth of his talent.

400 Miles From L.A., 1955 to 56 is a release of outtake and demo recordings by Lee Hazlewood, offering a unique insight into this writer and producer’s creative process. The project is divided into two parts, with the first 14 songs being the outtakes, for the most part previously unreleased, and the last 13 tracks comprising the demo for “Trouble Is A Lonesome Town,” based on his small-town Oklahoma roots. He pitched these tapes to Los Angeles record companies with Mercury Records finally taking a chance on Hazlewood recording his own version, in 1963.

Most of the outtakes are raw recordings of Hazlewood playing acoustic guitar and singing tales of travel and the harshness of life, told affectionately with dark humor. On a few of the tunes, he is backed by a small band featuring Al Casey, who worked with Hazlewood collaborator, Duane Eddy. The release is offered as a single CD, a double vinyl album set or as a deluxe vinyl version with a notebook, pins and shot glasses.

“Cross Country Bus” starts things off with an upbeat narrative of a couple traveling west to east through the U.S. with stops in St. Louis, Chicago, and Philadelphia. It is followed by “The Woman I Love”, a blues lament of love gone bad, possibly involving the same star-crossed couple from “Cross Country Bus.”

Many of the songs reflect a philosophy of realism, especially in “Peculiar Guy” where Red’s girl gets killed by a mountain lion and “It’s An Actuality” a send-up of modern psychology with zany, sarcastic lines like, “people with two heads. . . may have split personalities, it’s an actuality, not a probability!” Hazlewood’s quirky wit is shown throughout, something he shared with songwriter Roger Miller, though his was more country, while Hazlewood’s drew on his southwestern roots.

“Five Thousand and One” tells of the perils of bullfighting from the viewpoint of the toreador. One can imagine Marty Robbins having recorded this song. “Five More Miles to Folsom” is one of several Johnny Cash-styled songs. “Look At That Woman” with a Roy Orbison-sounding intro, suggests that Hazlewood was listening to fellow producer Sam Phillip’s work from Sun Records, or was Phillips listening to Hazlewood? If Hazlewood had pitched these songs in Memphis or Nashville, rather than L.A., he probably would have had his share of artists willing to record them.

The outtakes close with “The Country Bus Tune” a bouncy instrumental brightened up by Al Casey and band, making a nice transition to the “Trouble Is A Lonesome Town” tracks.

“Trouble Is A Lonesome Town” affectionately lays bare the good, bad and in-between of small-town Americana summed up as “some people are bad all the time, some are good . . . but most are good and bad most of the time.” In “Long Black Train” Hazlewood sings of two childhood friends, one becoming an outlaw while the other, maybe a songwriter or storyteller. “Son of a Gun” is a tale of sons judged by the sins of their fathers, while “Georgia Chain Gang,” not on the 1963 release is another Cash sounding tune, set up with a story of a con-artist convicted of embezzling the small town’s savings. “Six Feet of Chain” tells the tale of Orville and George Dobkins two thieving, backstabbing brothers who alternate jail sentences after stealing from each other.

The songs from “Trouble…” are separated by spoken/sung intros and variations on the title song, as was done on the 1963 release. Though it does tie the album’s theme together, it can be a little tiring after several times, especially since most of the songs stand up quite well on their own.

400 Miles From L.A., 1955-56 personalizes the already intimate look Hazlewood created in his Trouble Is A Lonesome Town album. It’s a rare insight into this writer/singer/ producer’s work before he went on to success, collaborating with stars including Ann-Margaret, Dean Martin and Nancy and Frank Sinatra. The small-town tales heard on these tapes can be viewed as the flip side to his big-city songs like “This Town,” and “Houston.”