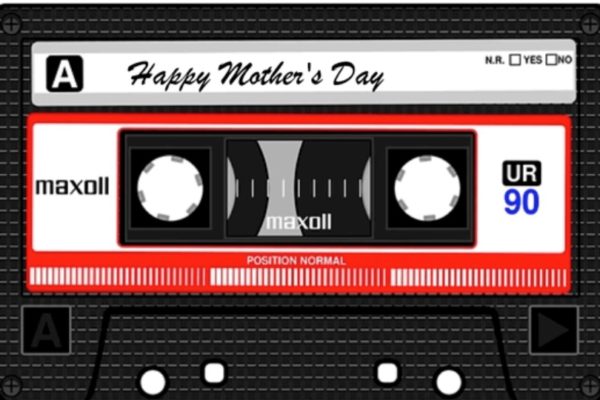 Old-school mixtapes always came with special feelings attached and who’s more special than your mom? Ask her and she’ll tell you. No one. Which is why we’re honoring mommas everywhere with this ultimate Mother’s Day Mixtape. Flowers last a few days but a great mixtape can last forever and thanks to sites like Spotify, you no longer need a cassette, a boom box and a pen. So here’s to the moms who let us play the drums in fifth grade and put up with our punk and/or heavy metal phase. Herewith the soundtrack to your next family outing. Happy Mother’s Day!

1. The Shirelles’ “Mama Said”
This ‘60s girl group had a top-ten hit with “Mama Said” and what better way to start off the mixtape than with a feel-good classic that praises the virtues of motherly advice. “Mama said there’ll be days like this, there’ll be days like this, my Mama said.” Mama knows what she’s talking about. No matter what obstacles life throws your way, you have to learn to brush it off and move on. Oh, and should a boy named Billy Joe introduce himself, please move on to the other side of the street and delete his number from your phone.

2. Spice Girls’ “Mama”
In 1997, you may have personally been hopping up and down in bars to Third Eye Blind’s “Semi-Charmed Life” but no one was as big and ubiquitous as the Spice Girls. Their lyrics had no hidden meanings; the pleasures were pure pop sweetness. “Mama” was written by Scary, Sporty, Baby, Ginger, and Posh as an ode to their mothers and unlike other Spice Girls songs, this ballad scales down the energy. If they ever do manage another reunion tour, some of the kids in the original video should be old enough to sing the five-part harmony.

3. Boyz II Men’s “A Song for Mama”
These guys were the kings of R&B ballads and their mothers were the “queens” of their hearts. Listening to this song, it’s clear the boys in this boy band loved their moms even more than their fans loved them. Written by Babyface, “A Song for Mama” will get you so emotional that only an orphan wouldn’t call long distance by the final chorus. And unlike “Cats in the Cradle,” this nostalgic song doesn’t come with a sting.

4. Willie Nelson’s and Waylon Jennings’ “Mammas Don’t Let Your Babies Grow Up to Be Cowboys”
For a change of pace, the next song nods to country music. Hey, cowboys may be tough SOBs but they understand the power of their matriarchs. Originally sung by Ed Bruce in 1975, the song hit another level when it became a duet pairing the legendary Willie Nelson and Waylon Jennings in 1978. Any time a child expresses a desire to be a cowboy, mom should put away the toy horses and discuss the advantages of being “doctors and lawyers and such.”

5. John Lennon’s “Mother”
Country singers aren’t the only ones to sing of heartbreak but it takes John Lennon to get us to heal right from this tune’s opening lyric (“Mother, you had me but I never had you”) which jumps out in a hauntingly beautiful way. The song, released on John Lennon/Plastic Ono Band, was born out of primal scream therapy so you know its emotions are raw. From the opening funeral bells to Lennon’s shrieking wails (“Mamma don’t go, Daddy come home”), “Mother” delivers an experience unlike any other song.

6. Pink Floyd’s “Mother”
Pink Floyd’s “Mother” is part of Pink’s story in the epic concept album/film The Wall. The lyrics are ultimately a conversation between the character (Roger Waters) and his mother (sung not by a woman but by David Gilmour). You don’t have to be “comfortably numb” as you hear the back and forth but if any song on The Wall is likely to relax you, this is the one. “Mother, do you think they’ll like this song?” The answer is unquestionably yes.

7. The Intruders’ “I’ll Always Love My Mama”
Take your minds off Mother’s Day stresses with this vintage piece by The Intruders who will transport you back to a feel-good era. This soulful group had the moves and the harmonies that had their high-waisted, bell-bottom-wearing fans dancing on shows like Soul Train or singing along in their Chevy Impalas. “I’ll always love my Mama, she’s my favorite girl. I’ll always love my Mama, she brought me in this world.” What mother wouldn’t enjoy hearing this song on Mother’s Day?

8. Paul Simon’s “Mother & Child Reunion”
“But the mother and child reunion, is only a motion away…” You can’t go wrong ending this mixtape with this Simon song. That reggae feel comes courtesy of Jimmy Cliff’s backup group (the song was recorded in Jamaica) and washes over the listener with an intoxicating hopefulness. We hope you enjoy Mother’s Day and if you’re seeing your mother or reflecting on your mother, we hope you smile like you did the first time you heard “Mother and Child Reunion.” That song would even put Mommie Dearest in a good mood.