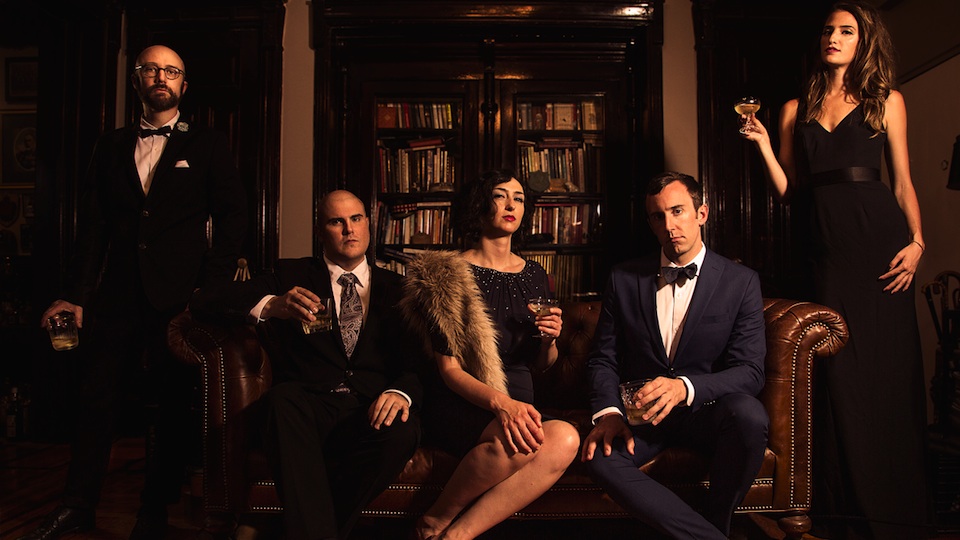 Brooklyn-based quintet Night Powers resides in a contemporary cityscape and their songs on the new release The Veil transport us to a variety of clandestine settings where lovers exchange furtive glances that intimate the promise of something mysterious, even dangerous. Drawing on a truly diverse range of influences — that run the gamut from the Spaghetti Westerns of Ennio Morricone to that ultimate bad seed Nick Cave to such desperate ‘50s-style crooners as Johnnie Ray to even Ventures-style surf guitar — this band defies the odds by not falling into pastiche but asserting itself with a new form of timeless romanticism.

If there is a theme throughout this new record it is, according to co-founders Rob Viola and Inbar Kishoni, one of secrets and vice. “We wanted to build a world of vice where each song is a different secret. Sometimes you’re the one with the secret,” says keyboardist Kishoni, referring to the Peeping Tom of “Dirty Windows.” Other times, you’re even deeper in trouble.

“Some of [the songs] are written specifically about two people in a relationship,” Viola adds, “two people experiencing the same events through different perspectives.” That idea manifests itself quite clearly in “Like Lovers Do” which segues from a quickened heartbeat to a swooning waltz then back again, even as the song’s hero and heroine exchange oaths of undying love and fealty. Viola’s affected croon straddles sleaze and tenderness; Natalie Devine’s quivering soprano is pure B-movie ingenue. As you might guess, this dichotomy allows for some compelling conflicts.

“Having the male and female singers allows a lot of different color, sort of like the Lee Hazelwood/Nancy Sinatra thing,” Viola points out. But a very different kind of lushness comes to the fore in “Tonight We Fly” which begins with a shuffling beat, lifts off into the stratosphere with reverb-laden guitar and vocals, then lands in some fancy ballroom where couples glide across the floor. With Kishoni’s piano heightening tension before the fuzz-laden guitar kicks in, it’s as if a bunch of indie rockers were tasked with taking over for a house band known for darkly seductive tangos and rumbas.

Kishoni admits one of the guiding principles of the album was taking the listener “somewhere that didn’t have to be the here and now.” And so we’re transported to a world of assassins, sirocco winds, and late-night trysts (“And The Moon” and “The Night Market”) and smoky cafes peopled by noir characters (“Marlowe”). We even take flight like the lovers from Bulgakov’s Master and Margarita (“Tonight We Fly”). Pulp Fiction’s Travolta and Thurmann would probably have this all on their shuffle.

Viola compared their sonic universe to the films of David Lynch in that “you’re not quite sure when or where it is but after you reside there for awhile it starts to become familiar.” As for Viola and Kishoni, the duo first met at Columbia University back in 2007 where Kishoni admits they gravitated to each other as odd ducks among their grad school peers. (“Hey, you look like a rocker,” she said of her first meeting with Viola).

The pair bonded over a shared interest in “spooky music.” Think Martin Denny, Portishead, and Fad Gadget. But what started with Viola triggering samples while Kishoni played keyboard transitioned to a full band — rounded out by singer Devine, bassist Gabe Sciallis, and drummer Steve Goldberg* — all of whom contributed to a ‘60s soul-garage vibe that just might raise the dead. (*Note: Dan Cawley takes on drumming duties for The Veil recording.)

Photo Credit: Image of Night Powers by Andrew Segreti courtesy of the band

0 comments on “Night Powers Isn’t Hiding Behind “The Veil””