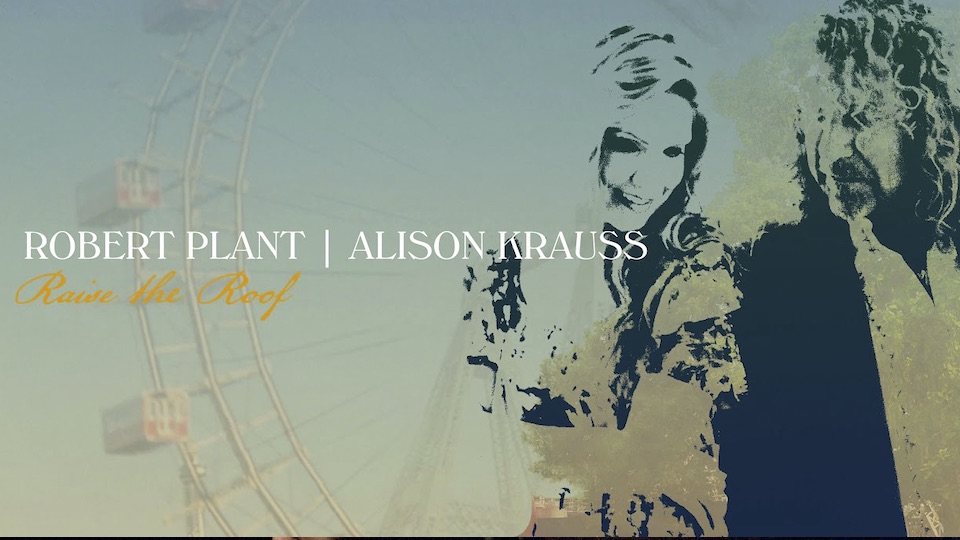 Bluegrass vocalist Alison Krauss and Led Zeppelin frontman Robert Plant might not seem like the most compatible of fits, but Raise The Roof continues the intriguing journey they began with 2007’s Grammy-winning Raising Sand.

“Quattro (World Drifts In)” flits between both of their camps, creating a sound collage that rocks as heavily as it flows, the two whispering voices pulsating through the speakers with ghostly aplomb. Plant’s background is admittedly in rock, but his solo career has shown tremendous strides in recent years. He’s also considerate of his standing in a world that both celebrates and reviles his band, one that made the seventies howl.

Anyone hoping for the sensual rocker would be better off returning to his 80s solo project Now and Zen; for those more open-minded, they’ll find the vocalist in strangely fitting form, especially on  “Go Your Way”, a pastoral rocker that features his most assured vocal in some time.

That’s not to say that Krauss is happy to sit back and let her long-haired compatriot hog the spotlight. Rather, “Trouble With My Lover” demonstrates her shimmering falsetto, the drums pummelling behind her, the vocals cascading across the microphone. Best of all, the pair- clearly mindful of their partner’s strengths – duet marvelously on “Can’t Let Go”, a punchy number that brings audiences back to the care-free sensibilities of the 1920s.

“These are songs that have gone into our hearts way back in time, but got lost in the twists and curves of the passing years,” quipped Plant. “You hear them and you go ‘Man, listen to that song, we got to sing that song!’ It’s a vacation, really—the perfect place to go that you least expected to find.”

Producer T Bone Burnett rifles through his back catalog, supplying the two vocalists with a stage-set that could surely fit the band when they find the opportunity to bring their sound to the masses. The 1966 Bobby Moore standard “Searching for My Love”  gets a zesty makeover, and has Plant blazing away with a vocal that sounds pleasantly reminiscent of the early Rod Stewart records. “It Don’t Bother Me” ventures into more solemn territory, while “The Price of Love” features a strangely haunting backing vocal from Plant. He sings gently beside Krauss, a fiery vocalist who brings as much ballast like any man worth his salt. And on the shimmering “Going Where The Lonely Go”, Krauss musters tremendous power by standing back from the forlorn atmosphere that washes over the song’s yearning message.

If the album can claim a masterpiece, it has to be “High and Lonesome”, a cascading jazz number, laced with barrelling drums. As if resurrecting the spirit of the mighty John Bonham, the drums kick in and the voices latch up a notch. What it lacks in polish, it more than makes up for in dynamics. Fittingly, the tune is credited to Burnett & Plant, tipping its hat back to Jimmy Page, Led Zeppelin’s producer and primary composer.

Considering that it was recorded before the pandemic, the album stands as one of the last of its ilk. If they were to record it now, it would be done over a cascade of timetables, Zoom calls, and overdubs.  Luckily, the album doesn’t suffer from these measures; it roars like a band playing together as if their lives depend on hitting every note as neatly as they can. And if such a method is to be considered antiquated, then consider me a sucker for antiquities!

1 comment on “Robert Plant and Alison Krauss “Raise the Roof””