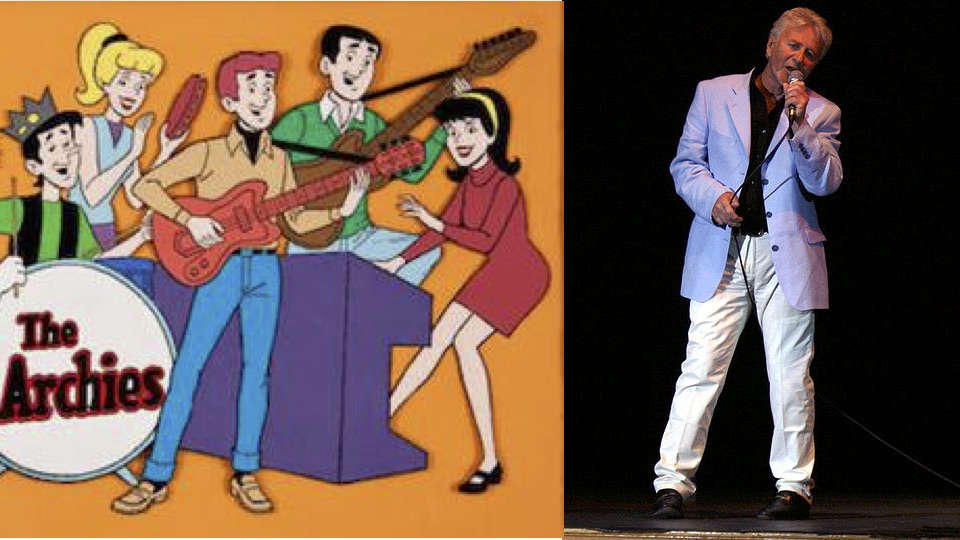 Singers Ron Dante and Tony Burrows are and were not a household name, but for a spell, a family with a working radio couldn’t keep their voices out of their house.

Dante’s first foray into being a household name was singing for The Detergents, who unleashed a 1964 parody of the Shangri-Las’ “Leader of the Pack” called “Leader of The Laundromat.”  Sadly, some people (like the three writers of “Leader of the Pack”) couldn’t take a joke and took the Detergents to the cleaners in the form of a lawsuit.  Five years later, one of “the Pack’s” composers, Jeff Barry, co-wrote (with Andy Kim) “Sugar, Sugar,” the biggest hit Ron ever sang on.  The song’s success compelled Ed Sullivan to ask Dante’s group, The Archies, to appear on Ed’s variety show.  Alas, the cartoon Archies were the Gorillaz of their time: an animated band whose members were heard and not seen which meant Ron sang as Reggie Mantle in his only appearance on Ed’s show.  Ron, who worked for song publisher Don Kirshner and sang demo songs for Neil Sedaka, the Animals, and Carole King, noted, “My mom called me and said, ‘You’re on Ed Sullivan!’  I said, ‘Not quite.’”  Ron went on to record five Archies albums and their hits “Jingle Jangle” and “Bang Shang-A-Lang,” but was ambivalent about his animated fame.

“I was thrilled to be asked to be the lead voice of The Archies, but I just thought that kind of identification might limit me.  Financially, it was great, (but) when those records first hit the charts, I just hid.  I kept such a low profile that no one could find me.”

But Dante was not just a pretty cartoon voice.  At the time that “Sugar, Sugar” went to the number one slot, Ron warbled on “Tracy,” a song that reached #9 by The Cuff Links. These no-name-recognition jobs set up more lucrative ones for Ron in commercials.  He recalled:

“I was also singing for Dr. Pepper, Coke, Pepsi–you name it.  When I had a hit record with The Archies, my commercial business went through the roof.”

At a jingles session for Coke, Ron found himself as one of four background singers, the other three being Valerie Simpson, Melissa Manchester, and Barry Manilow.  Ron struck up a friendship, then a producing deal with Manilow.  His ten years of producing Barry (including the hit “Mandy”) led to Ron working a soundboard on albums for Cher (Take Me Home) and Pat Benatar (In the Heat of the Night).

Dante wasn’t the only unknown lead singer who was in competition with himself on the charts.  The same fate occurred to Tony Burrows four times — in one year.  In the first half of 1970, a radio listener couldn’t spin a dial without hearing Tony croon as part of four separate groups on “Love Grows Where My Rosemary Goes,” (Edison Lighthouse band) “My Baby Loves Lovin’,” (White Plains) “United We Stand” (Brotherhood of Man) and “Gimme Dat Thing,” (The Pipkins). It’s a feat that no singer had ever done before or since.

But before Tony racked up these rapid-fire hits, he was singing on the Flower Pot Men’s 1967 British hit, the very Beach Boyish “Let’s Go to San Francisco;” a city he sang about loving but did not know.  Tony admitted: “The longest time I’ve spent in San Francisco was about three hours, between flights.”

Three years later, Burrows was like a hairier version of the ever-omnipresent Phil Collins in the ’80s. It was something that got Tony banned from the BBC for two years and caused his solo career to crash.  Tony recalled the bad old days when the BBC was the only radio game in town:

“That was the period when I had the solo records and I really and truly couldn’t get played. We had no commercial radio in those days, just BBC.”

His offense was that he wound up being the only performer to appear on the BBC’s Top of The Pops three times in one program.  A BBC bigwig believed that because Tony changed his clothes three times in one hour for his appearances with Edison Lighthouse, White Plains, and the Brotherhood of Man, Burrows was in the same league as a smart-aleck under-age teenager getting booted out of a pub only to return three more times with different fake driver’s licenses.  Tony remembered that a BBC producer dryly said: “It looks as if there’s something wrong with the situation where you appear with all these different bands.”

After scoring his last lead vocal hit in 1974 with “Beach Baby” as part of First Class, Burrows became a background voice of choice for Rod Stewart, Tom Jones, and Elton John, singing on Mr. John’s “Tiny Dancer” and “Levon.”

The best part of Burrows being in several bands in 1970 was that if there was a Battle of (his) Bands, Tony would always be on the winning side.

And, being in as many groups as Dante and Burrows mean there has to be one group that was influenced by the two singers’ multiple hits.  One band might have been Spinal Tap, whose title for their “Listen to the Flower People” song may have been derived from Tony’s Flower Pot Men moniker.

The only difference between the two bands is that Tap was rumored to record their songs at 11.

Image: Composite of The Archies and Tony Burrow (Wikimedia Commons)