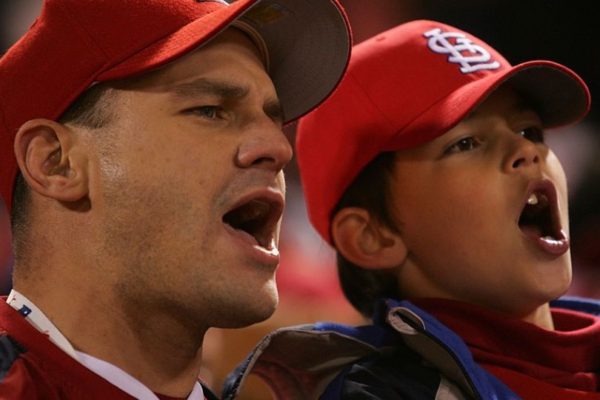 Let’s face it: sports fans can be, well, fanatical. You wouldn’t think anyone who goes through the trouble of painting his face and waving a giant foam finger would need any additional encouragement to root, root, root for his home team. But even a diehard fan sometimes needs extra motivation. So, whether the outcome of an entire season comes down to a single, 9th-inning at bat, or two non-rivals are playing a pre-season warm-up, nothing gets the blood pumping like a classic sports anthem. Here’s a list guaranteed to get fans up and out of their seats.

1. Journey’s “Don’t Stop Believin’”
Journey’s 1981 power ballad is favored by pols and sports teams alike. Its message of hope and redemption is tailor-made for public officials casting themselves as scrappy underdogs. It also works for sports franchises, as a rally cry when their backs are against the wall. At Detroit Red Wings hockey games, the recording is turned down during the line “born and raised in south Detroit” so the home fans can sing it like they mean it.

2. Queen’s “We Will Rock You” / “We Are the Champions”
Queen guitarist Brian May intended the foot stomp and hand clap of “We Will Rock You” to encourage fans to participate at live shows, but he could just as well have been thinking of sports games. Freddie Mercury’s staccato vocal works like a street fighter’s bare-knuckle jab. Pair that with the flipside’s soaring declarations of triumph over adversity in “We Are the Champions” and this one-two punch remains a fixture at sporting events the world over.

3. Neil Diamond’s “Sweet Caroline”
It’s easy to see why The Standells’ “Dirty Water” (“Oh, Boston is my home”) plays after Red Sox victories, but how does “Sweet Caroline,” a song with no Boston connection, become a Bean Town anthem? Legend has it a woman named Amy Toby — who selected music at Fenway Park from 1998 to 2004 — liked the song, played it during a game and it stuck!

4. Metallica’s “Enter Sandman”
There are songs associated with particular teams, but some become themes for individual players: Enter Hall of Fame reliever Mariano Rivera and Metallica’s “Enter Sandman.” The song about a fearsome, late-hour presence is a natural fit for the former Yankees closer Rivera, whose steely late-game presence on the mound sent shudders through the hearts of even big-game hitters.

5. Blur’s “Song 2”
If you tried to engineer the perfect song to get sports fans pumped, you couldn’t do much better than Blur’s “Song 2.” It’s got all the trademark qualities of a stellar arena jam: a propulsive beat that explodes into power chord bliss and a lyrical hook (“Whoo Hoo!”) that couldn’t be easier for a crowd to chant in unison.

6. Steam’s “Na Na Hey Hey Kiss Him Goodbye”
This 1970 chart-topper’s immortality is partly due to its continued use in the sports arena. You’ll hear it when a home team’s bats knock an opposing pitcher out of the game (see, also, Ray Charles’ “Hit the Road Jack”), or when one team is generally poised to knock another out of a playoff series. Not easy being on the losing end of a blow out while your opponent’s fans rain this one down on you.

7. 2 Unlimited’s “Get Ready for This”
The thumping beats and flashing lights of modern day sporting events resemble dance clubs and the same song elements that get people pumped on the dance floor — snare drum buildups, bass drops and simple vocal hooks — work in stadiums and arenas, too. Since its 1991 release, 2 Unlimited’s “Get Ready For This” has been used by franchises too many to mention.

8. Tag Team’s “Whoomp! There It Is”
The hook line of Tag Team’s 1993 hit “Whoomp! There It Is” seems like it was written with a slam-dunk in mind. In fact, one look at the original video for the song kind of removes any doubt. That title hook has become so ubiquitous in basketball arenas and baseball stadiums (after home runs), it’s easy to forget that the song has verses, too!

9. House of Pain’s “Jump Around”
It’s easy to understand why this 1992 track by LA hip hop trio House of Pain is used by teams around the globe, including English football club Arsenal, right before the team returns to the pitch at half time of every home game.

10. Gerry and the Pacemakers’ “You’ll Never Walk Alone”
While we’re across the pond, let’s consider how a show tune from Rodgers and Hammerstein’s 1945 musical Carousel becomes the beloved anthem of Liverpool F.C. It was actually Liverpudlian Merseybeat group Gerry and the Pacemakers’ 1963 version of the song that caught on immediately and has been sung by the club’s supporters ever since.

Photo: Image of fans at a game by Jamie Squire/Staff (courtesy of Getty Images)

0 comments on “Songs to Get Your Sport On”