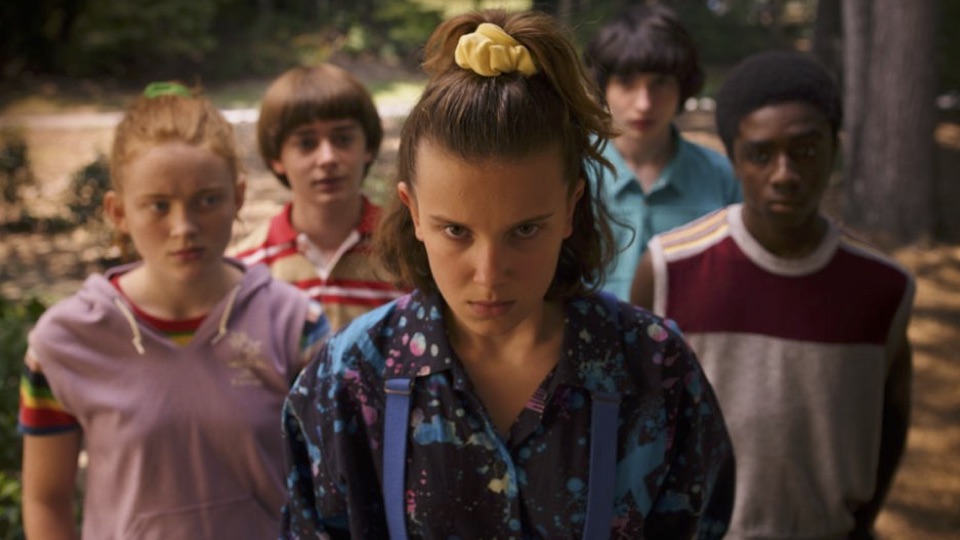 What’s more “4th of July” than fireworks and barbecues? How about nostalgia for the summers when we hung out at the mall, swam at the town pool, and all was right with the world. That is until the anxiety of impending doom sets in, and a Demogorgon monster returns to find a new host, wreak havoc on our town and turn our world Upside Down. In the new season of the hit Netflix series, Stranger Things (returning on the 4th), our favorite teens from Hawkins find themselves steeped in an era of striped socks, Spencer’s Gifts, New Coke and New Wave. What sets Stranger Things apart is how well it recreates the particular feel of the ’80s.

This season of Stranger Things is set in the summer of 1985 and fans can expect plenty of pop culture references that will bring you back to when teens rocked  “Born in the USA” t-shirts, the Commodore 64 was cool, and Mario was still in Donkey Kong’s shadow. We thought it would be, like, totally awesome, if some particular movies and songs were referenced in the new season. So, blow-dry those feathered wings, grab your Vuarnet sunglasses, and gun your Dad’s Iroc-Z to 88 mph: we’re heading back to 1985!

Related: “10 Movies That Defined Being A Teen in the 80s”

Goonies “never say die” and neither do the gang of teens from Hawkins. Mike, Dustin, Lucas, and Will may be too old to hang out in the basement and play “D&D” but they’re not too old to love  The Goonies. The Goonies was a must-see at the theater for teens in the summer of ’85. The tale of a bunch of misfits on a quest to save their family’s homes and recover One-Eyed Willie’s treasure clearly influenced the Duffer brothers in creating Stranger Things. In season 2, Dustin reached a level of coolness that Chunk could only dream of but it’s not out of character to have him or his buddy Steve doing the “Truffle Shuffle.”

Back to the Future

“Roads. Where we’re going, we don’t need roads.” Just about every teenager in the summer of ’85 was quoting Back to the Future, as no other movie quite captured their attention in the same way. Considering that Stranger Things will take us back to the past, fans should expect some sort of callback to the iconic film. Whether it’s a Delorean shown in a mall parking lot, or Will wearing a red puffer vest, it’s safe to say these kids would be fans of Marty McFly.

In the summer of ’85, Michael J Fox went from everyone’s favorite teenage Republican on the TV show, Family Ties, to a full-fledged movie star. Fox followed up the success of Back to the Future with Teen Wolf and if you were teen at the time, chances are you were humming “Surfin’ USA” while day-dreaming about surfing on top of the van with Styles. Fox’s “Scott” was pretty cool as “The Wolf”, except compared to the Magneto-level of world-saving powers that Eleven possesses, his ability to grow an obscene amount of body hair and dunk a basketball is lame by comparison. Teen Wolf is basically an allegory for puberty and the awkward changes it brings. Mike, Eleven and the gang are going through their share of changes, as evidenced by Dustin’s embracing hair mousse while taking on a new look for the school dance at the end of Season 2.

Before the bromance in Super Bad, there was Gary and Wyatt from Weird Science.  The mad scientist creation of a fantasy woman may seem a bit problematic now, but you can’t deny that “Lisa” was too cool for the likes of Gary and Wyatt. These best buds had a dorky likability that made them as relatable as the boys from Stranger Things. Now that Steve and Dustin’s friendship has grown in hilarious ways, it’s not a far leap to picture them putting bras on their heads.

The Breakfast Club practically defined what it felt like to be a teenager. The story of unlikely friends bonding together to fight the boredom of weekend detention plus the social cliques that high school students find themselves in, resonated with teens everywhere in 1985. Anyone who saw The Breakfast Club most likely knows some of the words to “Don’t You Forget About Me.” Spending a Saturday in a school library under the watch of a jerk of a Vice Principal is only slightly more appealing than being stuck in the Upside Down. The gang from Hawkins would surely be fans of The Breakfast Club — especially Eleven.

The video for “Don’t Come Around Here No More” is a trippy homage to Alice in Wonderland. What better song to illustrate the fear of the return of the Mind Slayer and the monstrous dimension of the Upside Down? Tom Petty’s voice is eerily cool in this 1985 classic from his Southern Accents album; it lulls you into a trance until the upbeat guitar licks and drums kick in. One moment feels like a release; it was hard not to yell “Hey! Don’t come around here no more” whenever the song came on the radio.

Rhythm of the Night- Debarge

“When it feels like the world is on your shoulders. And all of the madness has got you going crazy.” If anyone needs a place where they “can dance the whole night away” it’s Eleven and her friends who could use a break from bearing the weight of the world. It looks like they might be enjoying a little time hanging out at the mall this season. “Forget about the worries on your mind. You can leave them all behind.” That is until they need to band together to fight off the horror that’s come back to destroy their town.

Everybody Wants to Rule the World – Tears for Fears.

“Welcome to your life. There’s no turning back.” The opening lyrics to this Tears for Fears classic calls out to the teen brain yearning to put their childhood behind them. From the moussed-up hairdos to the pastel colors, the New Wave look could be found in the halls of any high school in 1985. This synth-pop classic has a dreamy opening that’s a perfect choice for setting the tone for the summer at Hawkins, whether leaving the halls at the end of a school year or thwarting a small-town apocalypse.

I’m on Fire- Bruce Springsteen and the E Street Band

There were a lot of short-lived fads that swept the ‘80s, like Lamborghini posters on a teenage boy’s wall and movies about break dancing. The huge success of Springsteen’s Born in the USA album was well-earned and it remains a classic. In 1985, guys wanted to be Bruce and girls wanted to date Bruce, as Springsteen’s embodiment of the masculine ideal was at its peak. The hauntingly beautiful mood created by Bruce’s vocals in “I’m on Fire” should light the match of desire between Joyce and Hopper that fans have been craving since Season 1.

Only the Young- Journey

One of the many appeals of Stranger Things is how they cast actors whom fans loved in the ‘80s; for example, Matthew Modine was a stand-out as the creepy Dr. Brenner in Season 1. “Only the Young” by Journey was on the soundtrack to the movie Vision Quest starring a young Modine, and there wasn’t a teenage boy who wasn’t doing pushups in their room to this song, emulating Modine’s “Louden Swain.” It would be a perfect nod to Modine’s past to show Billy working out before his lifeguard shift, as the powerful voice of Steve Perry belts out “Only the young can say…” Unlike the earworm “Don’t Stop Believing,” “Only the Young” is a forgotten gem, just waiting to be brought back for a new generation to discover.

In honor of Eleven, we thought we’d take this to “11” and include Madonna’s “Get into the Groove” on our list.  It’s a head-bopping dance classic from the soundtrack of 1985’s Desperately Seeking Susan. Madonna exuded coolness in every scene and her original look was being absorbed by teen girls in ’85. If Max, Eleven and the rest of the gang are going to be hanging out at the Starcourt Mall, (as seen in the hilariously spot-on, retro teaser trailer), what better song to have in the background to get viewers into the groove of 1985.

1 comment on “Stranger Things: Taking You Back to the Summer of ’85”