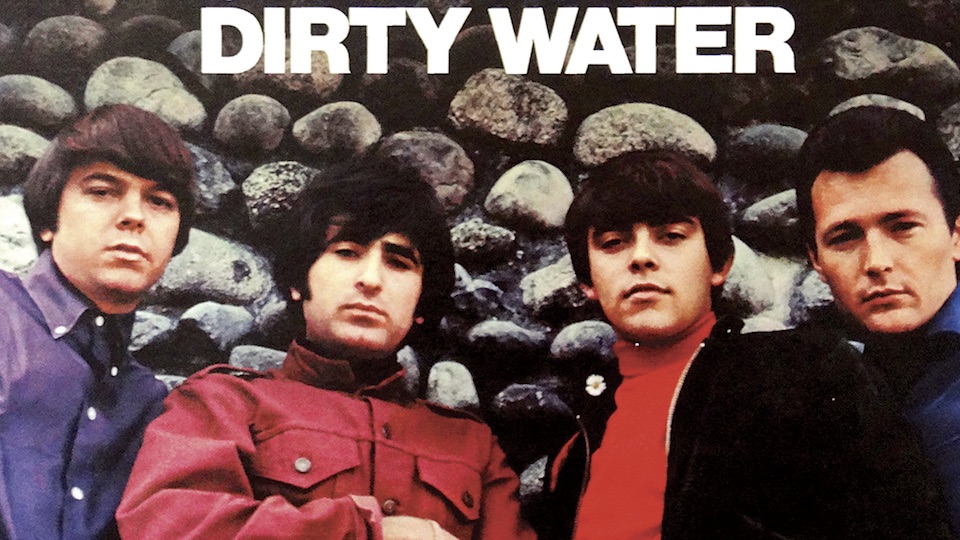 The snarling vocals, crunchy guitar and smoking hot organ that anchor the Standells’ garage rock hit “Dirty Water” paints an indelible portrait of Boston as a town full of “lovers and muggers and thieves,” as described in the lyrics. Ironically, the band wasn’t even from Massachusetts. They hailed from faraway Los Angeles, where the group began performing in 1962, honing their rock and roll chops in clubs and other venues. The band’s initial lineup featured vocalist and keyboard player Larry Tamblyn (brother of West Side Story actor Russ Tamblyn), guitarist Tony Valentino, bass player Jodi Rich, and drummer Benny King. Both Rich and King left early on and were replaced by bassist Gary Lane and drummer Gary Leeds, who later became a member of The Walker Brothers. Leeds was replaced by Dick Dodd, who had played in several bands, including the surf-rock outfit The Bel Airs. Dodd had also been an original member of Walt Disney’s Mouseketeers. During their early years, the group was known by several monikers, including the Standels and Larry Tamblyn and the Standels, before adding another “l” to their name and settling on The Standells.

Related: “The Mystery of Bobby Fuller”

In addition to performing regularly in the Los Angeles area, The Standells appeared on several television series, including The Munsters, where they performed “I Want To Hold Your Hand,” and “Come On And Ringo.” They also showed up on episodes of Ben Casey and Bing Crosby’s 1964 eponymous sitcom, where they portrayed a fictional band called The Love Bugs. The band recorded several singles and a live album, which were released on a variety of labels, including Vee-Jay, Liberty, and MGM. They had little chart success until they hooked up with producer Ed Cobb, and landed on the Tower Records imprint, a subsidiary of Capitol. Cobb provided the group with “Dirty Water,” a song he wrote about a fateful visit he made to Boston, during which he encountered a mugger. The band helped craft the song’s sound, with Valentino creating the memorable guitar lick, and Dodd provided the “I’m gonna tell you a story” intro and the spoken word interjections between verses and at the conclusion of the tune. “Dirty Water,” reached number 11 on the charts in 1966, and was the band’s highest-charting single.

The Standells were celebrated for their tough-guy stance and rough-edged sound. They became standard-bearers for what came to be known as the “garage rock” sound. Their subsequent singles included “Sometimes Good Guys Don’t Wear White” and “Why Pick On Me,” though neither of those releases reached the chart heights of “Dirty Water.” The group was featured in Riot on Sunset Strip, a 1967 film for which guitarist Valentino and then-current bassist John Fleck composed the title song. The Standells also issued several albums, including Dirty Water, titled after their biggest hit, and The Hot Ones, a collection of covers of some contemporary rock and roll hits. “Try It,” a raunchy, Stones-ish single released in 1967, was one of their strongest tunes, but it ran into some trouble. The song’s initial success was derailed when some radio stations banned it after a conservative Texas media mogul named Gordon McLendon deemed the lyrics suggestive and obscene. Though the band successfully debated McLendon on Art Linkletter’s television show regarding the issue, the controversy stalled the song’s momentum, and the group’s popularity began to wane.

Both Gary Lane and Dick Dodd left the group, and the band continued on through the early 1970s before breaking up. Lowell George of Little Feat was briefly a part of the group during that time. The Standells re-formed in various configurations over the ensuing years, and a Tony Valentino-led version of the band released an album in 2013 entitled Bump. Sadly, several members of the group’s most famous lineup, including Dodd, Gary Lane, and John Fleck, have passed away in the last decade. Their signature song is always played after Boston Red Sox victories, and can also be heard at Boston Celtics and Boston Bruins games. “Dirty Water” has never left the public consciousness, and the song has been featured in films, television shows and commercials, including the climax of a Hyundai ad during this year’s Super Bowl. This iconic, “tough guy” number from a Los Angeles-based band is now considered a Boston anthem, and a garage rock classic.