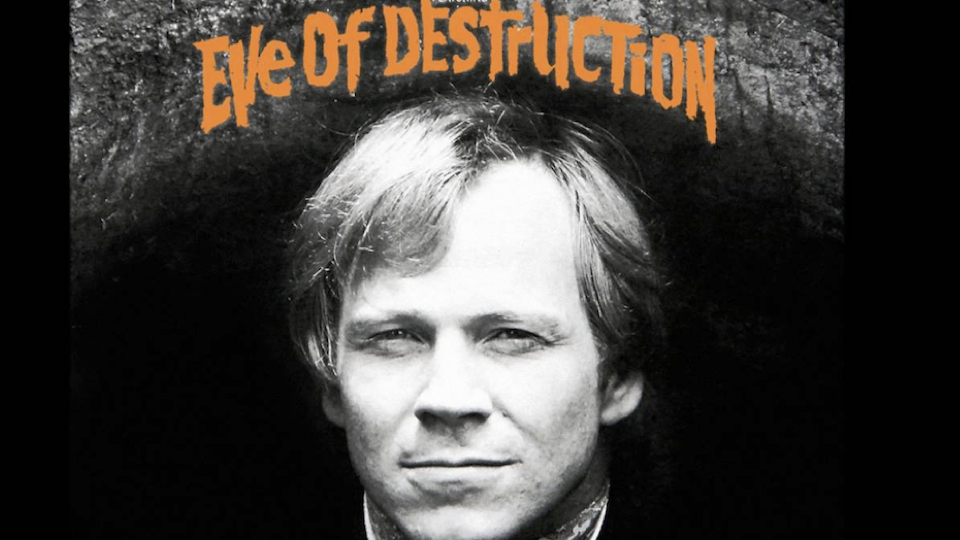 The highest-charting protest song of 1965 didn’t come from the pen of Bob Dylan, Joan Baez, or Phil Ochs. It was the foreboding, socially relevant “Eve of Destruction,” written by P.F. Sloan, which reached number one on the Billboard charts that year. Sloan wrote or co-wrote a number of hit songs, including “You Baby” for The Turtles, and “Secret Agent Man” for Johnny Rivers. He also crafted tunes for Jan & Dean, Herman’s Hermits, and The Searchers.

Sloan and his frequent songwriting partner Steve Barri played on the studio sessions for the first version of The Grass Roots, who scored a hit with the Sloan-Barri tune “Where Were You When I Needed You.” The duo was also busy producing records for artists like Shelley Fabares, Ann Margaret, and The Ginger Snaps.

Sloan wrote the apocalyptic, Dylan-esque “Eve of Destruction” in 1964, and presented the song to The Byrds, who turned it down. The Turtles recorded it, and the band included the song on their 1965 debut album, It Ain’t Me Babe, but their take on the tune wasn’t released as a single at the time. It was eventually issued in 1970.

Singer-songwriter Barry McGuire (who had been a member of The New Christy Minstrels) recorded the most well-known version of the song. The backing musicians included drummer Hal Blaine and bassist Larry Knechtel, who were part of that legendary coterie of session musicians who came to be known as The Wrecking Crew. Sloan, who played guitar on the song, was also a sometime member of that group, having played with them on tracks like The Mamas and The Papas hit “California Dreamin’.”

Barry McGuire’s gravelly-voiced, distinctive vocals, coupled with the song’s startling imagery and pointed commentary on social issues such as war, race, and religion, helped strike a chord with listeners. But “Eve of Destruction” also generated some controversy and negative reactions. The song was banned on a number of radio stations, and it was criticized by conservatives. That didn’t stop it from rising to the number one spot on the Billboard charts in September of 1965, taking the top spot away from “Help!” by The Beatles. It even inspired a response record, entitled “Dawn of Correction,” recorded by a group called The Spokesmen. McGuire’s album, Eve of Destruction, made it to number 35 on the charts, and in addition to the title track, included his version of Bob Dylan’s “She Belongs To Me” and “It’s All Over Now, Baby Blue,” as well several compositions from Sloan and the Sloan-Barri team.

“Eve of Destruction” turned out to be McGuire’s only Top 40 hit. He continued to record and release albums, was featured in films such as the cult satire The President’s Analyst, and appeared in the Broadway show Hair. He later became an important artist in the genre of Contemporary Christian music. P.F. Sloan also continued to write and record throughout the years but often expressed that he felt shunned and pushed aside by the music industry. He penned a memoir, What’s Exactly The Matter With Me? which was published in 2014, and he passed away the following year.

“Eve of Destruction” has been covered by artists as varied as Jan & Dean, Johnny Thunders, Public Enemy, and Lemmy. The song’s message continues to resonate and seems just as relevant as ever in these difficult times.

4 comments on “The One-Hit-Wonder File: “Eve of Destruction””