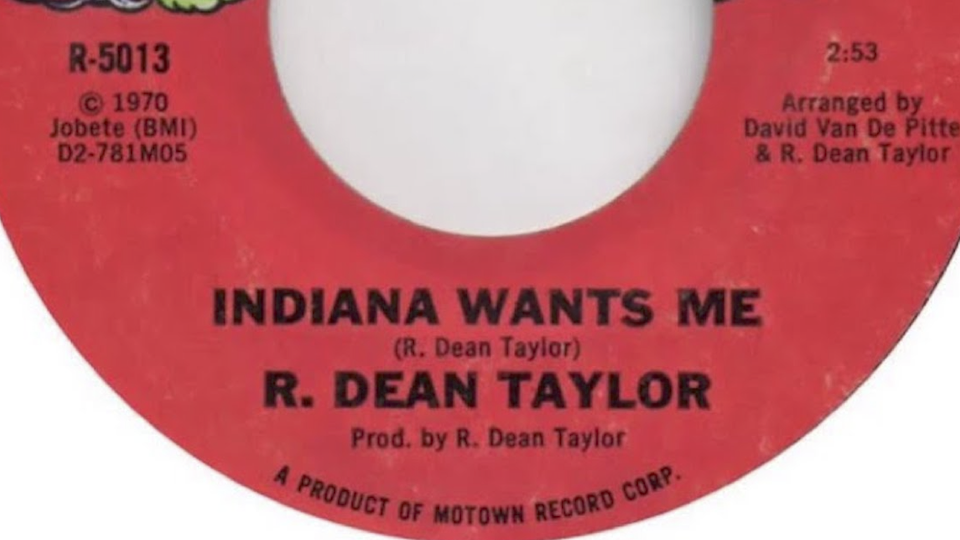 Every song has a story, some songs tell a story, and sometimes there’s a story about the underrated talent behind a song. Such is the case with R. Dean Taylor, whose memorable hit “Indiana Wants Me,” was released in 1970. You might not know Taylor’s name, but you’d definitely recognize some of the other songs he worked on as a writer-producer during the 1960s and 1970s.

Taylor had some regional success as a recording artist in his native Canada before relocating to Detroit in 1964, where Motown hired him as a producer, songwriter, and artist. In addition to recording some unsuccessful singles for the label in his early days there, Taylor worked on hits for The Four Tops and The Temptations, often collaborating with the legendary team of Holland-Dozier-Holland.

“Gotta See Jane,” a song recorded by Taylor and co-written with Eddie Holland and Ronald Miller, became a Top 20 hit in the UK, reaching number 17 on the charts, though it wasn’t very successful here in the US. “Gotta See Jane” was later covered by Golden Earring. When Holland-Dozier-Holland left Motown, Taylor became a member of the behind-the-scenes group known as “The Clan,” which also included Deke Richards, Pam Sawyer, and Frank Wilson. They co-wrote and produced hits such as 1968’s “Love Child” and 1969’s “I’m Livin’ In Shame” for Diana Ross and The Supremes. During Taylor’s tenure as part of “The Clan,” Motown was signing rock and roll artists to Rare Earth, a subsidiary named for one of the first rock acts to join its lineup. Taylor joined the roster for this rock and roll-oriented label, which also included Love Sculpture, The Pretty Things, and Kiki Dee.

Taylor wrote, produced, and performed “Indiana Wants Me,” which was released on Rare Earth in 1970. The song tells the story of a guy on the run for killing a man who insulted his wife. He narrates the story in the form of a letter to her, apologizing for leaving her and his young child behind to go on the lam. The evocative, almost cinematically rendered tale is punctuated at several points by the sounds of police sirens, and when the cops finally catch up with the singer at the climax, they shout for him to give himself up, and then we hear the sounds of gunfire during the fadeout. “Indiana Wants Me” was a huge hit, reaching the Top Ten in both the US and UK.

While he never had another significant US hit, Taylor did score a top ten single in the UK in 1974 with “There’s A Ghost In My House,” which he originally recorded for Motown back in 1966. The English band The Fall covered the song, and director Edgar Wright included Taylor’s version on the soundtrack to his 2021 film Last Night In Soho. Taylor continued to work as a writer and producer, and also recorded and released some successful singles in Canada, including “Taos, New Mexico.” In recent years, he’d been working on a memoir about his time in the music business. He died in January 2022 at the age of 82. While Taylor may not be a household name, pop music fans will always remember his tragic ode to a lonely fugitive who just wants to get home to his beloved, though fate has other plans for him.

4 comments on “The One-Hit Wonder File: “Indiana Wants Me””