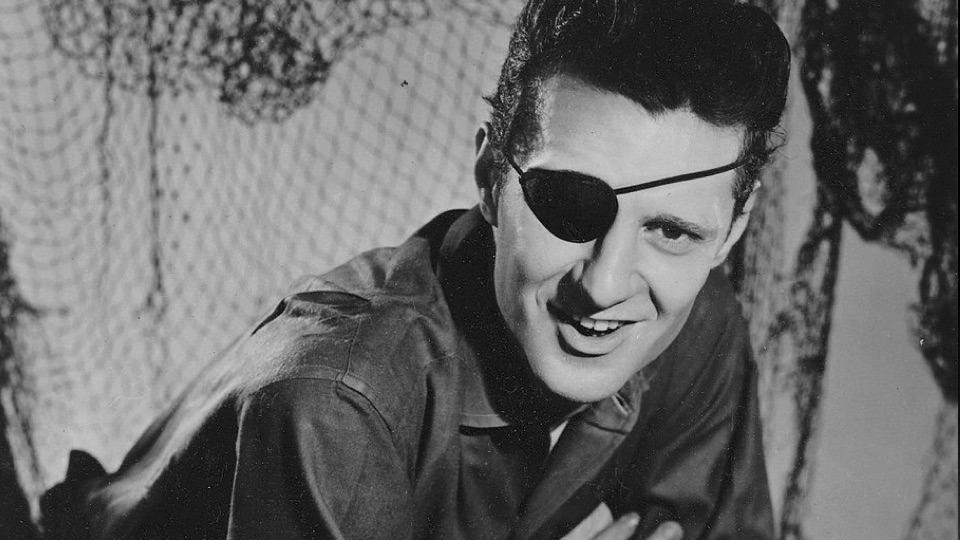 Way before Adam Ant could shiver any timbers while wearing pirate regalia, there was an earlier rockin’ piratical version called Johnny Kidd and the Pirates.  Kidd wouldn’t be seen on a British stage without wearing his black eyepatch, knee-high black leather boots, and wielding a cutlass he’d wave over his head as if he was about to fight off Blackbeard — or groupies.

Johnny may have looked like Captain Hook but when it came to writing songs, Kidd and his Pirates only created one truly killer hook, via a 1960 #1 hit (in England) called “Shakin’ All Over.”  Later, it was covered by the royalty of rock including Van Morrison, The Who, David Bowie (in Tin Machine), and Iggy Pop. Even a 73-year-old Mae West did a credible version.

The long recording life of “Shakin’ All Over” began in the dingy basement of the Freight Train Coffee Bar in London where Kidd assembled his bassist, Brian Gregg, and guitarist Alan Caddy to hastily write the B-side of a single that they were to record the next day at Abbey Road.  Gregg remembers, “We said, ‘Let’s write any old rubbish.’”

Kidd, a former house painter whose real name was Fred Heath, recalled nights when he painted the town: “When I was going ’round with a bunch of lads and we happened to see a girl who was a real sizzler we used to say that she gave us ‘quivers down the membranes.’  It was a standard saying with us referring to any attractive girl.  I can honestly say that it was this more than anything that inspired me to write ‘Shakin’ All Over.’”

After a six-minute writing session produced their signature song, the band retired for the evening. Gregg noted, “We got up early in the morning, had a run-through of the song in my front room and we went to the studio and recorded it.  We thought it would be the B-side but it went straight up the charts.”

The song may have sunk before it soared if an insecure Caddy hadn’t called session guitarist Joe Moretti in to perform lead guitar. After strumming the tune’s memorable opening, Moretti came up with the song’s second shimmering hook by sliding a cigarette lighter up and down the fretboard.

The hit would be the last stab of glory for Kidd and his pirate posse. Gregg admitted: “After that, we decided we were songwriters.  And the three of us got together a few times to write a song and we just couldn’t do it.”

But as Kidd’s profile slowly decreased, sales of “Shakin” increased thanks to a Canadian group called Chad Allen and The Expressions. Their cover closely mirrored Kidd’s and became #1 in Canada and #22 in the USA.

Related: “Vince Taylor: Inspiration to A Few, Forgotten By Many”

In an attempt to hide the fact that the band was Canadian, the group’s record company, Victory, placed on the single’s label that the song was played by “Guess Who?”  To Chad’s chagrin, the band’s label name stuck which confused some fans into thinking that they were actually The Who. Ryan Adams, who once stopped a “fan” from shouting for him to play Bryan Adams’ “Summer of ’69” by offering the heckler cash to leave the concert hall, could relate to the two bands’ frustration when Guess Who would get pleas at their concerts to play The Who’s “My Generation” while The Who would hear fans scream to play the Guess Who’s “Shakin’ All Over.”

The Who obliged–and then some!

The group’s scorching take on “Shakin’” on their 1970 Live at Leeds album is arguably the definitive version of the tune. Daltrey praised Kidd for his inspiration by acknowledging: “That heavy power trio sound, backing up a singer; it’s a British institution.”

Sadly, Johnny wasn’t around to hear The Who’s rendering of his song.  Four years earlier, Kidd, 30, died in a car crash while his driver, the latest Pirate bassist, Nick Simper, lived on to co-found Deep Purple.

Yes, Johnny Kidd could be considered a One-Hit Wonder.  But leave it to Mae West, who inadvertently had the last word on the career of all One-Hit Wonders: “It’s better to be looked over than overlooked.”

3 comments on “When Johnny Kidd Was The Man”