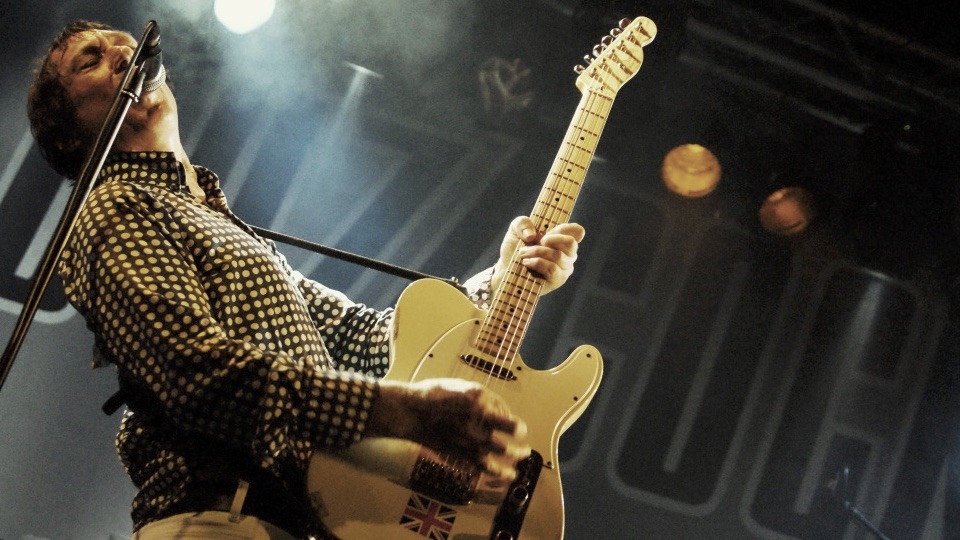 Editor’s Note: This interview with Steve Diggle was done last year prior to the COVID lockdown. While the tour plans mentioned below have been tabled for the moment, the Buzzcocks have released a new box-set, “Complete UA Singles 1977-1980.”

“I love James Joyce, I’m not from Ireland” Steve Diggle chuckles. “I’m from Manchester. Buzzcocks had seven or eight hits. We did Top of The Pops a few times. So, we did all these love songs and I wanted to break through like a freight train. I was reading a bit of Kafka at the time and there’s a bit of Orwell in the lyrics. But I was also reading Ulysses, with all his cinematic language. It was a modernistic text. So, I brought that into the song. Going down the streets, it could be O’Connell Street, that’s Joyce. And that was ‘Whenever I’m in doubt about things I do, I listen to the high street wailing sounds in a queue.’ That was the ‘Harmony In My Head’.”

Amidst the anarchy, stood Buzzcocks, perhaps punk’s most intellectual outfit. Co-fronted by guitarists Steve Diggle and Pete Shelley, the band prided themselves on their varying shades and positions on life. One Buzzcocks track could pull you into a pictorial walk where flowers and bus stops waited, while another could look at life’s misery through all its pain and penance.

“I had ‘Love Is Lies’ on the second album,” Diggle confirms. “Pete was writing all these love songs, so here was this antithesis of this, almost a piss-take. It was the first Buzzcocks songs on acoustic. I could sing these ones on acoustic. Pete couldn’t, he’d do all these electronic things like ‘Homosapien’ later.

On all my solo albums, there’s always an acoustic. I guess I was bringing out The Beatles, Bob Dylan, probably The Kinks. My first lead vocal was on ‘Autonomy,’ which was on the first album. We did it in this question and answer way, I sang it in this very high way.”

Diggle has taken a philosophical approach to our interview. He muses over some of the musical choices offshoot band Flag of Convenience made, (“Some thought we were a New Romantic band, it was at the beginning of artists like Boy George and Depeche Mode”), reflects on some of Buzzcocks’ more intricate chord changes (“I brought the groove to ‘Why Can’t I Touch It?’ that Keith Richards type groove”), notes how the band’s life experiences shaped their darker third album (“Every artist has to go through that and self-assess”) and makes reference to a near-fatal car crash he had when he was seventeen. “I opened my eyes and the petrol pump was pummeled,” he recalls. “My mate died, he was twenty. When something like that happens, it really changes your outlook.” Since then, he’s held a more measured view on life, learning how to appreciate it as only a death can teach us. He turns to Joyce once more, exploring the beautiful liturgy that closes The Dubliners. He’s clearly well versed with the Irish scribe.

Shelley died in 2018. Together, Diggle and Shelley had worked closely, both serving as songwriters, guitarists, vocalists, and spokespeople for Buzzcocks.

It was their band and Diggle was mindful of the closeness while performing at the Royal Albert Hall after his passing. “It was supposed to be a regular Buzzcocks gig,” Diggle points out. “Then Pete died. Someone suggested we get a few guests and I said I’d do it, I’ve been around a long time. So many people called and said they’d sing or they were sorry for what happened. Liam Gallagher lives near me. I met him for a drink and he said he’d sing a few. He couldn’t make it in the end, a lot of the big names couldn’t make it. But we had a few singers. We had people like Dave Vanian, Captain Sensible. It was quite punk in a way. Some of them didn’t know the words, coming out with pieces of paper, not singing them properly. It reminded me of Buzzcocks in a way. If it had been people like Sting, something like Live Aid, that would have been hideous. But it was a dignified affair. I had to remember that we were doing it as a memorial for Pete. Normally I’m out there, but I had to be a bit more dignified at that gig.”

It served as more than a celebration of Shelley’s life, it was also a celebration of Diggle’s importance to the band. He notes that he’s now the third singer to front the band. Besides the two guitarists, Howard Devoto, later of Magazine, sang for the band in its earliest incarnation. “Howard and Pete had things like ‘Orgasm Addict.’ They´d written things together when I met them. I was on bass, then worked on to guitar. I brought things like ‘Fast Cars’ to the band to the Kitchen album. We had some leftover stuff from Howard like ‘Love Battery.’ We did the Spiral Scratch E.P. with Howard. He was in the band six months or something. A blink in the eye to someone like me [laughs].”

For Diggle, he can recall smoking cigarettes to get that crisp ‘Harmony In My Head’ vocal just right. Just as the nicotine burned through his mouth to pour out that stunning vocal, these days he gets his fire from the positive reactions people spread to both him and Buzzcocks. “The reaction from people on Facebook and Twitter has been fantastic,” he says, with justifiable pride. “We did a UK tour recently, Newcastle, Glasgow, places up North. And it was just fantastic. I didn’t know what to make of it. But then the drummer started and the audience went mad. I’m singing things I haven’t sung in a long time. We’re keeping Pete alive in one way. I’m not trying to be Pete Shelley, I’m doing things as I do them. We were told we could do an hour and fifteen minutes. I thought I haven’t gotten this far by listening to people, so I’ll do an hour and a half if I want. I’m sixty-five, so I’ll be dead soon. I’ve got to live each day.”

There’s no shortage of new material for Buzzcocks. “We´ve released the new single. It was never officially released as a record, but I did a video of it a few years ago. That’s where the idea that it’s been out before comes from. The idea of ‘Gotta Get Better’ is that things have to get better. It’s simplistic, a bit like The Beatles’ ‘I Saw Her Standing There.’ Something direct. Hard to know if that or the other [‘Destination Zero’] is the B-side. It´s like a double A-side. There’s the box set coming out and there are many songs that people haven’t heard. We’re going to do festivals and we’re going to tour the States. I think I have an acoustic idea for the next B-side. We’re moving to the next phase of Buzzcocks.”

Photo: Steve Diggle of the Buzzcocks (2011, via Wikimedia Commons)

1 comment on “Catching Up with Steve Diggle of Buzzcocks”