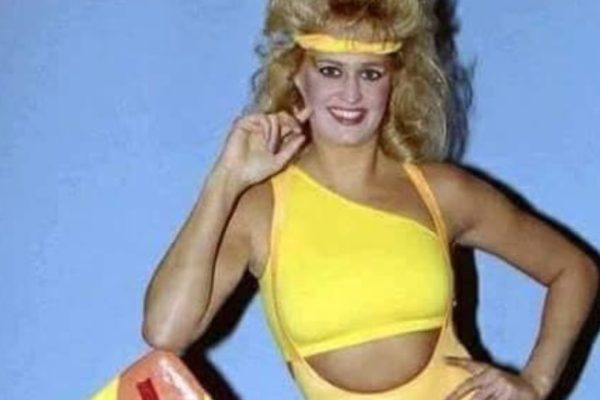 Since it premiered on the airwaves in 1986, the first incarnation of the Gorgeous Ladies of Wrestling has emerged as something of a cultural touchstone. But in the last year, it’s become downright enshrined thanks to Netflix’s hit dramedic — or is it seriocomic — scripted TV series GLOW. CultureSonar caught up with Patricia Summerland (a.k.a. Sunny), one of the original members of the original G.L.O.W. who, as it happens, also had some anecdotes to share about the hair metal icons of KISS, Motley Crue’s founding member and drummer Tommy Lee, and the late Playboy magnate Hugh Hefner. Read on for the details.

[amazon template=right aligned image&asin=B000092T43]Q: You were part of the original G.L.O.W.: Gorgeous Ladies of Wrestling. Is there a character you relate to most strongly on the current Netflix series and if so why?

A: Betty Gilpin. She is strong and fierce with a sweet naïveté and with a child in the series just as I had a child in GLOW. (She was only four years old.) I can relate to that part of her character and she’s a blond bombshell just like the one I portrayed in G.L.O.W..

Q: What is it about that subculture that resonates with contemporary audiences?

A: Thanks to YouTube, the younger audience knows us now since they can watch some of our matches there. And they say, “Wow! What a cool ‘80s show!” … Thanks to Netflix’s GLOW they are now understanding where and how we got started in a long-shot sort of way but the new show is fictional — not directly about us or how it was for the ‘80s G.L.O.W. television Gorgeous Ladies of Wrestling show. It’s truly amazing that we have such a big fan base 31 years later. I feel very blessed to have that. Thank you to our fans who are family like Sylvester Boler and Robert Nguyen who are a very big part of us G.L.O.W. ladies when we go to shows together. Also Shawn Campbell, Adrian Duarte, Diana Prince, David Miles, Jim Buchelt, Anthony Collins Jr and Sr., and Willie Fryson to name a few.

Q: Did your G.L.O.W. character have a theme song? If so what was it? If not, what might it be and why?

A: I don’t have a song for the ring but I do have a themed knock-knock joke as that was part of my gimmick along with my surfboard and Spuds McKenzie and frisbees. My character is true to me as I’m the fun-in-the-sun-girl from Newport Beach, California. I’m a native — born and raised in Los Angeles. Sunny, the California Girl.

Q: Is there a particular match from your G.L.O.W. days that sticks out as especially memorable? What was it and why?

A: My favorite match would be all of them! However, one was a stand-out for me and that was with Big Bad Mama, the Voodoo Queen. R.I.P. Mama. She had me in a trance with my Barbie doll in hand and threw special dust in my face. And on command I had to do whatever the doll did. She flipped my doll; I flipped in mid-air. I flew off the third turnbuckle and she killed me in that match… Very difficult and ah-mazing at the same time.

Q: You posed for the 1999 KISS issue of Playboy. Do you have a favorite KISS song? Which one and why?

A: I love all the KISS songs. All are the best. You want it, you got it! “Beth” is one of my faves, and of course “Rock N’ Roll All Night” and party every day!

Q: Who was your favorite KISS member and why?

A: I know and love them all, however I know Uncle Gene the best. He would come to my house in North Hollywood and Studio City and bring chocolate cake and balloons to my daughters b-day and mine. I have fond memories of the KISS balloon tricks on his tongue. I love his family too. His wife and I would take Spin Class together and do gym time. Let’s leave it at that.

Q: Did you meet Hugh Hefner in the process? Any anecdotes to share on that front?

A: I was blessed to meet Hef at the mansion while filming a video with Tommy Lee and I forgot the other guy’s name. Great singer. Gosh, I hate when that happens. Too many concussions from pre- and post- wrestling. Anyway the life and times there at clubs like Le Dome… We were treated like royalty always with Hef… He was a very soft-spoken, gentle, giving man. And funny too. He had his moments of being quiet and shy. I really did not like the pipe cigar smell much when he would blow it out and in my face! It seemed the men at the mansion were older pervs. Not all of them of course. There were hot men, stars of all sorts… And us to mingle in a bikini. Never did I go topless like some of the ladies. I was way too shy. He changed a lot for us females in this world. He gave us a voice with a strong sexual attitude. “Always classy” I say. A wrestling term just like Blassie. He stood up for gay people and of color rights plus so much more. A great humanitarian and icon. He will be sadly missed and laid to rest right next to his first Playboy model and love Marilyn Monroe. R.I.P. Mr. Hugh Hefner.

PS. For our review of Netflix’s GLOW, click here. And for more strong women on the small screen, check out our post TV’s Summer of Girl Power.

0 comments on “Sunny Memories from the “Gorgeous Ladies of Wrestling””