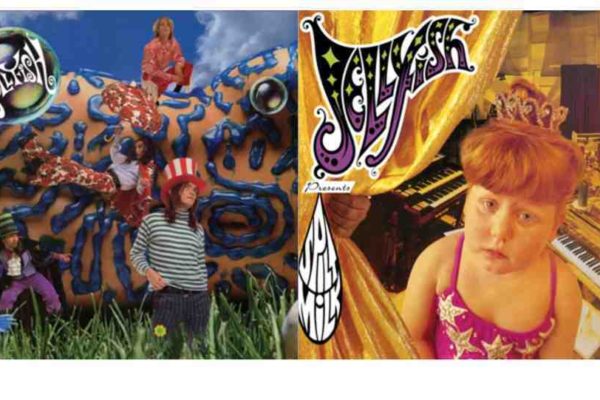 In the ’90s, a resurgence of the power-pop took place as artists like Matthew Sweet, Velvet Crush and XTC took up where the Raspberries, Badfinger and Big Star had left off. (You could add that these latter bands were simply carrying the torch themselves for the guitar-driven and harmony-based songs of The Beatles, The Who, and The Hollies.) One of my favorites from the end of the millennium, however, is Jellyfish — a San Fran group featuring lead vocalist-drummer Andy Sturmer, keyboard wizard Roger Manning, and guitarist Jason Falkner at its core. Although their music is definitely less well-known to the casual listener (due in part to the shortness of their career), their music more than holds its own when held up to that of their contemporaries.

Their first album Bellybutton was released in 1990. Back then, many groups in power pop’s second wave wore their influences on their sleeves but Jellyfish took it even further. They were fully clothed in their influences. Manning’s and Sturmer’s delightful tunes are drenched in the style and earwig-laden hooks of ELO, Todd Rundgren, and of course, The Fab Four. Check out “All I Want Is Everything,” a catchy ode to rock stardom, then tell me that these guys aren’t doing their best Cheap Trick impression, even as they nod to John, Paul, George and Ringo in the lyrics: “I think I’d like to play guitar and be a Beatle… that’d be so swell…”

This freshman effort is full of clever lyrics, angelic harmonies and perfectly sync-ed up playing that feels like a fin de siecle homage to The Beatles’ best. I love hearing the Lennon-esque vocals on “She Still Loves Him” and the Harrisonian flourishes during the guitar solo on “Calling Sarah.” The key throughout though is that while you can hear the nods to XTC and The Move, for instance, Jellyfish’s carefully constructed songs tend to leap beyond their influences as well. Every song on Bellybutton pops: the exuberant “Baby’s Coming Back,” the sprightly “Now She Knows She’s Wrong,” the moodier “The King Is Half Undressed…” Listened as continuous play, the album continually surprises you with what comes next.

Falkner quit the band after the Bellybutton tour because his own songs weren’t making it to CD so Manning and Sturmer re-grouped in the studio with talented sidemen like Jon Brion and Lyle Workman for the band’s sophomore effort Spilt Milk (1993), unquestionably Jellyfish’s magnum opus — enhanced with elaborate production values and multi-layered instrumentation. From The Beach Boy harmonies of the opening track “Hush” to the Queen-esque power of “Joining a Fan Club,” Jellyfish came back at a whole other level, and seemed as comfortable executing a boisterous tune like “New Mistake” as they were with their more experimental tracks like “Russian Hill.” The album climaxes with the anthemic “Brighter Day,” which doubly serves as the record’s coda.

Spilt Milk is a remarkable achievement but sadly it’s also the group’s final studio album, as tensions within the band caused a break-up in 1994. That didn’t stop the band’s music from showing up on compilation albums in the coming years, like Fan Club (2002), Best! (2006) and Stack-a-Tracks (2012) or even more recently via two live albums: Live at Bogart’s (2012) and Radio Jellyfish (2013). And so despite their brief official career, Jellyfish somehow lives on. How do you kill a Jellyfish anyway? Aren’t those things immortal?

5 comments on “The Joy of Jellyfish”