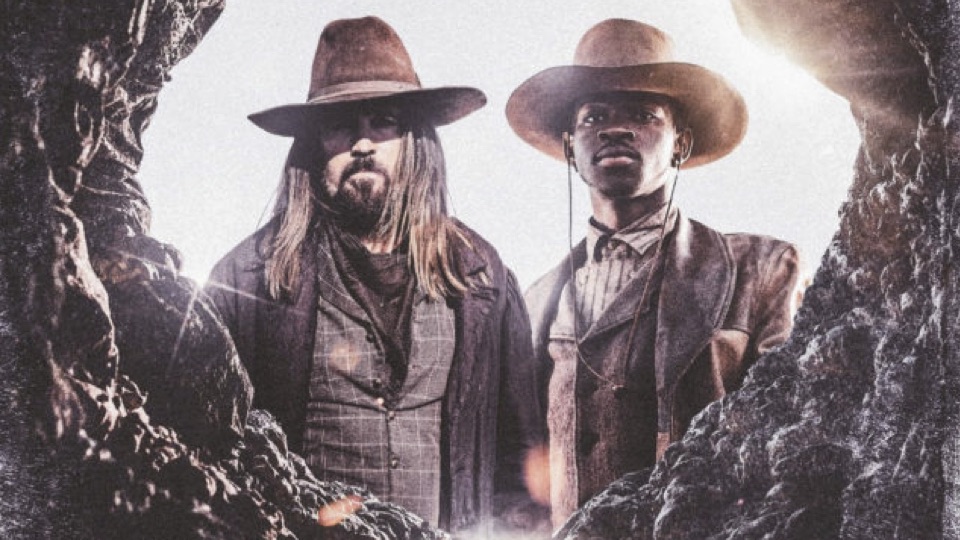 Lil Nas X’s “Old Town Road” taps into the myth of the American West, with promises of overnight fame and fortune that align with our fascination with hits that seem to appear out of nowhere.

“Old Town Road” is one of them, sitting in the Number One Billboard Hot 100 position for eight weeks and counting. The song’s 20-year-old Atlanta-based rapper is conscious about what he says will “entertain,” as he performs the genre-blurring pop hustle perfected by artists like Paul McCartney and Michael Jackson on their duet “Say Say Say.”

The outlaw-themed music video for “Old Town Road” features Lil Nas X and Billy Ray Cyrus, and revisits the “heist” motif of the film for McCartney and Jackson’s 1983 song. But “Old Town Road” tells us a truth which that first postracial collaboration eluded, namely reclaiming the presence of black artists in Country music and black cowboys in the West.

“Old Town Road” began as a viral sensation, but received wider attention when Billboard kicked it off the Hot Country list, where the song debuted at #19. Billboard denied accusations of racism citing a lack of “elements” consistent with “today’s country.” Never mind the banjos transferred from a Nine Inch Nails sample that Lil Nas X purchased on YouTube. To that, he added lyrical references to horses, hats, boots and a get-back yearning delivered with a southern twang.

But Americans love an underdog, an attitude heardin the song’s refrain: “Can’t nobody tell me nothin’.” The Billboard removal resulted in an outpouring of social media support, most notably by Cyrus himself, who tweeted: “@LilNasX Been watching everything going on with OTR. When I got thrown off the charts, Waylon Jennings said to me ‘Take this as a compliment’ means you’re doing something great! Only Outlaws are outlawed. Welcome to the club!”

The music video amplifies the outlaw theme, making Billboard’s ousting its subtext. The short film, directed by Calmatic, stakes an even firmer claim for the song’s country bonafides with a storyline about a bank-robbing duo escaping 1889 into present-day LA — through a time portal.

By contrast,  the music video for “Say Say Say,” masks racism with optimism. It tells an ahistorical fiction about the cooperation between a black man and a white man in a past that couldn’t exist. The Depression-era narrative imagines “Mac and Jack” peddling fake products and services in order to raise money for an orphanage. The (con)artists are seemingly equal in their outlaw charity and their ability to access American places.

The film for “Old Town Road” moves such cooperation to the present day, allegorizing the song’s struggle on the charts while telling us the truth about the interracial, cross-genre hustle of pop music.

As in Mac and Jack’s video, Lil Nas X and Cyrus are bandits on the run. In the opening scene, the pursuing sheriff (Chris Rock) ceases his chase, providing pointed commentary: “When you see a black man on a horse going that fast, you just gotta let him fly!”  Yet as they approach what might be a “safe house,” Lil Nas X hesitates: “I don’t know, man. The last time I was here they weren’t too welcoming to outsiders.”

This line points to Billboard’s decision, which situated Lil Nas X as an interloper in a supposedly white musical genre, as well as in the Hollywood fantasy about the Old (White) West. His hesitation recognizes the realities of racism, to which many white people, even well-meaning ones represented by Cyrus, are blind. Whether in the cultural spaces or physical places that black men travel, the perception of “trespassing” carries life-threatening consequences. And thus Cyrus’s optimism— “You’re with me now. Everything’s going to be alllllright”— is immediately proven wrong: a shotgun-wielding white man fires from inside the house, motivating the escape into the time portal.

The “Old Town Road 2019” setting is an LA neighborhood populated with black folks of all ages, friends and family sitting on porches and watering their lawns. A teen girl recognizes Lil Nas X’s moves as an invitation to a dance-off, which is followed by a drag race between Lil Nas X’s horse and a young man’s car.

“You’re from Compton, right?” the losing driver asks, a reference to artists like N.W.A and Kendrick Lamar, the latter whose “King Kunta” video seems like inspiration for these “Old Town Road” neighborhood scenes. The reference may also be a shout out to the Compton Cowboys, a group reclaiming black cowboy culture and reflecting what archivist Bri Malandro coined the “Yeehaw Agenda.”

In yet another parallel to the “Say Say Say” video, Cyrus pulls up in a red Maserati after Lil Nas X uses his winnings on a blinged-out Nudie suit, a nod to SoCal country. The situation recalls McCartney coming to Jackson’s aid by extending a hand to the younger man into the car. The new video, however, is not about a white man pulling a black man up.

Cyrus needs Lil Nas X to ride with him, a metaphor for Cyrus’s own involvement in the song. While the country-singer-turned-TV-dad lent his support to Lil Nas X, the young rapper is the one making Cyrus relevant. This was the hope that 40-something McCartney had when he teamed with 25-year-old Jackson, whose star was still rising. But unlike McCartney, who gave Jackson the advice that lost him the Beatles’ catalog, Cyrus is humble. He told an ABC Nightline interviewer that Lil Nas X doesn’t really need his advice.

Whereas McCartney and Jackson’s endgame is charity, Lil Nas X and Cyrus unapologetically raise their bags of money to reveal the point of their hustle. When they find themselves in a bingo hall, we realize the song itself is what it’s all been about. They perform to the crowd of middle-aged and elderly white people, who break out into an “Achy Breaky Heart”-style line dance. These listeners recognize the song’s country credentials—so why doesn’t Billboard? Lil Nas X also dances and poses cheerfully for pictures, one with a sweet old lady, endearing him to us just as much as if he gave his money to orphans.

The video for “Old Town Road,” makes clear that the pop song is the means and object of the hustle. Lil Nas X pulls back the curtain on pop songs like “Say Say Say,” which begs, “Don’t play games with my affection.” The “games” suggested in the McCartney-Jackson song are the scams featured in their video, the postracial fantasies about a black and a white man getting along while they safely travel down road after road without consequence.

But these games are the ones all pop musicians play with our affection.

Lil Nas X’s EP is set to come out this month, so we’ll see if our gold panning keeps paying off. “This is just the beginning,” Lil Nas X told Nightline. “People won’t realize it until they realize it.”

And that’s what makes a perfect pop hustle.