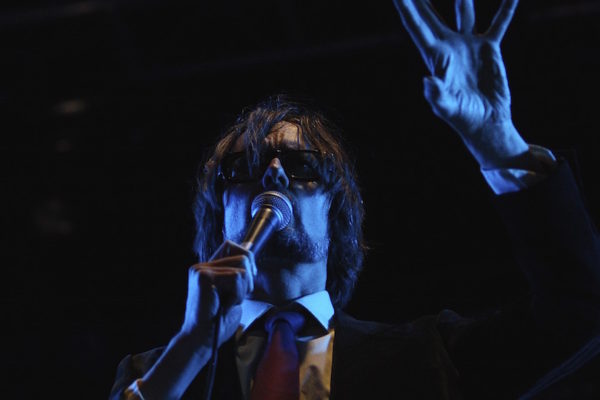 “I am not Jesus, though I have the same initials.” What a great line that is for front-man Jarvis Cocker to open a song with. It speaks of the God/human complex that an artist can experience after becoming a superstar. Cocker felt like the fans were nearly expecting miracles from him now (“I’d like to make this water wine, but it’s impossible”), whereas he himself did not feel any different (“I am the man who stays home and does the dishes”). This contrast is carried throughout the song “Dishes” until its climax, which comes with the self-reconciliation that “I’m not worried that I will never touch the stars / ‘Cos stars belong up in heaven and earth is where we are.” He’s telling us (and himself) to forget about chasing fame and setting impossible ideals for ourselves and instead, if only for one moment, just enjoy being alive.

“Dishes” is only a 3-minute song, but still totally representative of the direction [amazon template=right aligned image&asin=B000006DI9]that Pulp took with This Is Hardcore. In 1998, pressure and anticipation were high to see how the band managed to follow up Different Class. That was, after all, the album that had placed them at the forefront of the whole Britpop movement three years earlier, through its spectacular critical and commercial success. In the meantime, things were not exactly ideal in the Pulp world — long-time guitarist Russell Senior had quit the band due to his disliking of the celebrity lifestyle, and Cocker was going through both a break-up and a serious cocaine addiction. Instead of choosing the easy route and creating Different Class Vol. 2, Pulp did something much bolder: they made a record that reflected those struggles, one that was dark and world-weary, with the accent put on experimentation rather than accessibility.

Look no further than the first track to understand that idea. “The Fear” opens with a string melody that seems to be taken straight out of a horror movie soundtrack (which Jarvis actually acknowledges in the third line), and lyrics that perfectly complement it; panic attacks, losing the plot, and loneliness turned up to “ten” are the order of the day. Things get even more confessional on “TV Movie,” where a strong singer-songwriter vibe is established through its acoustic first half and painfully naked lyrics that seem to be directly about Cocker’s ex-girlfriend: “Is it some kind of weakness / To miss someone so much?” Still, nothing really comes close to the “Help the Aged”-“This Is Hardcore” section perhaps the finest one-two punch in Pulp’s whole discography. The former is the album’s catchy lead single, an encouragement to love and empathize with the elderly on the surface, but upon closer inspection, is full of sexual undertones. This transitions into the title track, where the sexual theme is simply given a huge, cinematic arrangement with sweeping strings, horns, pianos, and guitars. Forget the traditional verse/chorus structure, this is a song that builds up, cools down, then grows in intensity again, all with Jarvis’ vocals in full range. You’ve never really heard anything  quite like it.

Now I’m not going to pretend like This Is Hardcore is the most consistent album in the world. There is a noticeable drop in quality on the second half, with the exception of “Glory Days” and its much needed dose of triumphant optimism. And there is no real need for the closing track to go on for that long (except that Jarvis wanted the album to clock in at exactly 69 minutes). But I think This Is Hardcore needs to be viewed in the same light as other difficult masterpieces made by artists in the midst of personal crises, such as Sly and The Family Stone‘s There’s a Riot Goin’ On or Neil Young‘s Tonight’s the Night. These are all albums that took the audience’s expectations and shook them, turned them on their ass, and gave us something real and powerful instead. Now I don’t know about you, but I’ll happily take an album like that over something more polished and consistent any day.

PS.  Another edgy band that came and went….and this artist also went through his “dark period.”