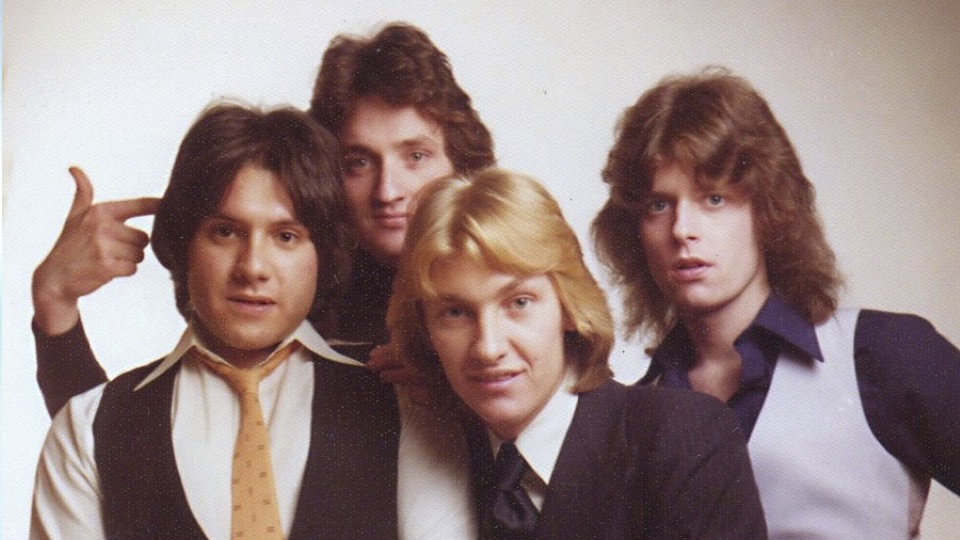 Can you name the influential and well-regarded Midwest rockers that power-popped their way through the 1970s, gaining a reputation for killer live shows while opening for acts like Blondie, KISS and The Police? It’s not Cheap Trick or the Shoes, but their fellow Illinois-based rockers, Pezband. The group formed in the Oak Park area in 1971 and blazed their way through the Chicago club circuit with a British Invasion-inspired sound that balanced the melodic style of The Beatles with the harder-edged stance of The Who and The Yardbirds. The band released their self-titled debut in 1977. The album was a welcome helping of rock and roll topped with a pop glaze that showcased the group’s talent for crafting great songs. The disc featured guest appearances by Randy Brecker and the Big Man himself, Clarence Clemons. The record received positive reviews, and Pezband were one of the first groups to be marketed by their label as a “power pop” band.

Pezband recorded their second album, Laughing In The Dark, in 1978. This sophomore release featured catchy, energetic songs like “Stop! Wait a Minute” and “When I’m Down” that would make bands like The Cars and The Knack green with envy. Rolling Stone even selected the album as one of the best records of the year. The band continued on their trek as musical road warriors; they opened shows for Fleetwood Mac and Supertramp, among others. Pezband also released a pair of EPs, Too Old, Too Soon and Thirty Seconds Over Schaumburg, which neatly captured the essence of their frenetic, energy-filled live performances. They were part of a power pop explosion that included groups like Cheap Trick and The Dwight Twilley Band. Both reviewers and fans appreciated the band’s combination of pop smarts and rock and roll fierceness.

It seemed like the future was bright for Pezband. Their third album, 1979’s Cover To Cover, brought a slightly harder edge to their pop dynamic and featured more than a hint of the rising “new wave” sound. The songs bounced from pulsating rockers like “Stella Blue” and “Make Me Happy” to the vibrant “Back In The Middle” and the politically themed “African Night.” But a lack of support from their record label (which had been suffering financial issues) and low sales killed the band’s momentum just when they could have broken out in a big way. The record industry was going through a lot of changes at the time, and like some other worthy bands, Pezband got lost in the shuffle. The group initially split up in 1980, though they’ve occasionally reformed in various configurations in the ensuing years.

The Pezband story doesn’t end there, however. The band has always enjoyed a cult following among power pop enthusiasts, and now Jem Records has released a fantastic new version of the group’s third disc, entitled Cover To Cover Remixed. The remastering project, completed by the album’s original producer, John Pavletic, brings fresh life to infectious songs such as “Meika” and “Don’t Look Back.” The album is a joyous blast of musical ear candy for rock, power pop, and new wave fans. Mimi Betinis’ tough, yet tender lead vocals, Tommy Gawenda’s boisterous guitar, Mick Rain’s killer drums, and Mike Gorman’s on-the-spot bass, sound better than ever. Pezband are spiritual cousins to bands such as the Raspberries and Big Star and are worthy of checking out. Cover To Cover Remixed is a great place to start discovering (or re-discovering) them.