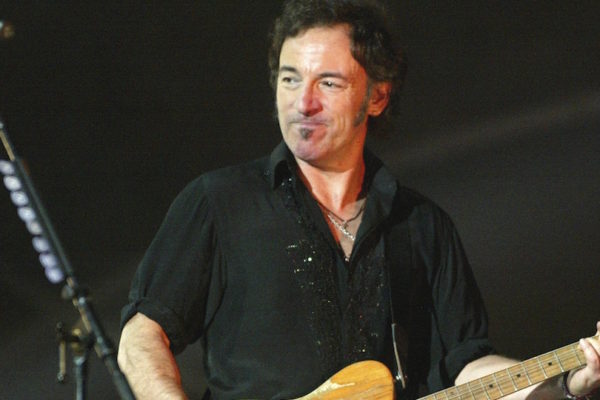 Bruce Springsteen has developed a reputation as one of rock and roll’s finest live performers, to the extent that his recent residency on Broadway is shattering box office records even without the presence of the venerable E Street Band alongside him. But those concerts and shows wouldn’t be possible without a recorded catalog that stands out for both its longevity and consistency. Most of Springsteen’s diehard fans, of which there are many, know pretty much every nook and cranny of that catalog. But if you’re a new adherent or a casual listener, these ten songs may have escaped your notice. And yet they are among his very best songwriting and recording efforts.

1. “Lost in the Flood” (1973)
Springsteen’s debut album Greetings From Asbury Park, N.J. is known largely today for “Blinded by the Light” and “Spirit in the Night,” two songs that combined his hep-cat wordplay with soulful work by his backing band. Most of that album has an upbeat feel to it, but this stunner of a song foreshadows how the characters who populate Springsteen’s songs would soon be depicted less romantically and more realistically. For the people on the margins of society whose stories he unflinchingly tells here, the flood never truly abates.

2. “Zero And Blind Terry” (1973)
To some true believers, Springsteen was never better than when he was writing melodramatic songs like this about boys who fight on the streets and the girls who love them (against their better judgment). This song was recorded for 1973’s The Wild, The Innocent, & The E Street Shuffle but didn’t see daylight until 1998’s Tracks, Springsteen’s first collection of cutting-room floor material. Bruce sings the song, complete with its almost supernatural ending, with the grizzled authority of an elderly bar patron eager to share his knowledge with anybody who’ll listen.

3. “Loose End” (1978)
Here is another song that only came to light for Tracks, but was originally meant to be one of the highlights of a 1978 album that Springsteen shelved in favor of the one that would become The River. It’s hard to see why he left this unheard so long, as it’s one of the most muscular performances by the E Street band and possesses so many hooks that it could have been his first big hit at radio. (That would have to wait until “Hungry Heart” in 1980.) It’s not a pretty look at romance, but it’s an honest and invigorating one nonetheless.

4. “Stolen Car” (1980)
Springsteen was known for his wordiness in the early part of his career. By the time of The River, he had learned to do more with less. The word “haunting” gets kicked around an awful lot when describing songs, but there’s truly no better way to describe what Springsteen does here in just a couple short verses. The narrative doesn’t come to much, just a guy driving around in the titular vehicle with his thoughts. But what the lyrics suggest, and what Springsteen’s hollowed-out vocal and the subtle keyboard work of Roy Bittan and Danny Federici confirms, is that this guy is about to fade right out of existence.

5. “Cautious Man” (1987)
Tunnel of Love was actually recorded while Springsteen was married to actress Julianne Phillips, but a close listen to some of the lyrics on the album reveal that trouble was brewing. Many songs refer to the way people in relationships put up deceitful cloaks to hide themselves from those to whom they should reveal everything. And this story about a man so afraid of simple happiness that he’s on the verge of sabotaging it falls into line. At the end, God’s light falls on the couple in the song, but this is as dark a romantic parable as you’re going to hear.

6. “I Wish I Were Blind” (1992)
There are a lot of problems with Springsteen’s 1992 albums Human Touch and Lucky Town. Chief among them was the self-help feel to many of the lyrics, which made Springsteen come off like that guy who’s finally found happiness but was much more interesting when he was messed up. This song avoids those problems by lovingly paying homage to the classic weepers of Roy Orbison. It features an excellent vocal performance from Bruce with a sympathetic harmony vocal from Righteous Brother Bobby Hatfield, who knew great ballads.

7. “The Line” (1995)
Long before it became such a hot-button issue, immigration was on Springsteen’s mind, especially on his folk-based album The Ghost of Tom Joad. Ever the expert at story songs, Springsteen here spins a moving tale about a border patrol officer whose loyalties get tangled when he falls for a young woman trying to get across illegally. The nuance and insight he shows for the subject matter is impressive, but he makes sure to tell an enthralling story first and foremost so that it doesn’t go down like medicine.

8. “Your Own Worst Enemy” (2007)
Magic found Springsteen and the E Street Band recording again with renewed vigor and purpose. They also showed a willingness to go outside their comfort zone on several tracks, including this winner. With a dignified string section along for the ride, the music is a nod to the baroque pop favored by producer Phil Spector or bands like The Left Banke. The lyrics are a harrowing depiction of what happens when our darker sides, usually dormant, threaten to rise to the surface and topple all that’s good and pure in our lives.

9. “Kingdom Of Days” (2009)
If you’re looking for an underrated album in the Springsteen catalog, Working on a Dream is a great place to start. For whatever reason, it didn’t seem to land like some of his others, even though it includes some of the most unabashedly pretty music he’s ever released. This one is a love song that testifies to the fact that not even the ravages of age can dampen the fires of passion. Springsteen sings it with a yearning voice and open heart that could soften even the fustiest cynic.

10. “Hunter Of Invisible Game” (2014)
One thing about Springsteen lyrics is that they’re not generally meant to deceive or obfuscate; you can usually tell what’s going on with the first listen. This oddly compelling number from High Hopes, his most recent studio release, challenges that notion, remaining stubbornly strange and all the more fascinating for being so. The music, a quirky waltz with cinematic flourishes, is also out of left field. It’s always a good thing when an artist can surprise us after so long in the game.

PS. The Boss also makes another one of our lists, this one with “wheels.”   And read about a memorable collaboration with a late rock hero.