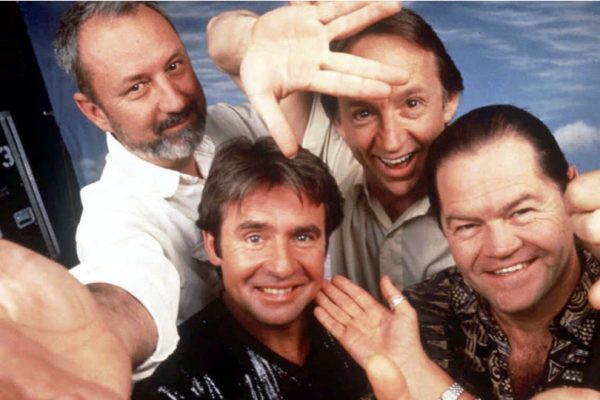 Break out your miniskirts and bell-bottoms. The Monkees are back! Their new release, Good Times!, is filled with their special brand of pop. It may feel a bit like the Sixties; but this isn’t simply an exercise in nostalgia. It’s been 50 years since The Monkees’ TV series was launched to capitalize on the popularity of the British invasion bands, as well as the humor in movies like A Hard Day’s Night. Once a week between 1966 and 1968, Micky Dolenz, Davy Jones, Michael Nesmith, and Peter Tork found themselves in ridiculous predicaments from which they always managed to extricate themselves, often to the accompaniment of a song. “‘I’m a Believer,” “Pleasant Valley Sunday,” “Last Train to Clarksville” and many others all became Top 40 hits. Most of these songs were written by some of the 60s best songwriters, including Neil Diamond, Carole King and Gerry Goffin, and Harry Nilsson.

On Good Times!, The Monkees first album since the loss of Davy Jones, the “Pre-Fab Four” return to the formula that worked so well for them in the past. This time around, the songwriting duties are fulfilled by Andy Partridge (formerly of XTC), Rivers Cuomo (Weezer), and Noel Gallagher (Oasis) — all of whom have a long track record of writing sunny, Beatlesque tunes. The record is produced by Fountains Of Wayne’s Adam Schlesinger, who also contributes a song.

The original Monkees albums featured the world famous Wrecking Crew, the backing band that appeared on so many great albums in the 60s. For Good Times!, The Monkees are backed by a variety of musicians, including Schlesinger on guitar and his Fountains’ bandmate Brian Young on drums. Singer-songwriter Mike Viola contributes guitar and backing vocals to several songs. (As an aside, Viola’s 2007 album Lurch is one of my favorite pop albums.) Nesmith lends his guitar to many of the tracks, and Dolenz and Tork contribute drums and keyboards respectively on several tracks.

The album kicks off in splendid fashion with the title track, an unreleased Harry Nilsson song that Dolenz sings in duet with the composer from his original demo. Since Nilsson died in 1994, it’s certainly a “good time” to hear him again. “You Bring the Summer,” Partridge’s contribution, sounds like a lost outtake from XTC’s pseudonymous band, the Dukes of Stratosphear, with all three of the surviving Monkees contributing vocals. The hook-filled songs continue with “She Makes Me Laugh” (Cuomo), “Our Own World” (Schlesinger), and “Gotta Give It Time” (Jeff Barry/Joey Levine).

Things slow down for “Me & Magdalena,” an absolute gem written by Death Cab for Cutie’s Ben Gibbard. Nesmith takes the rare lead, duetting with Dolenz. Gibbard claims that The Monkees were his first great love, and he returns the favor with this haunting, memorable tune.

After a great run of the fun songs you would expect from a Monkees reunion, leave it to Noel Gallagher and Paul Weller to put a damper on the album’s sunny atmosphere. Nesmith and Dolenz trade vocals on “Birth Of An Accidental Hipster”:

High in a rooftop, singing a song
Choirs of angels all sing along
It’s late and I’m scared, so please, don’t be long
I’m still not sure where I came from
Feeling low

[amazon template=left aligned image&asin=B000002JX0]Tork (“Little Girl”) and Nesmith (“I Know What I Know”) each contribute a solo number. But it’s Dolenz’s song written with Schlesinger (“I Was There (And I’m Told I Had A Good Time)”) which proves the perfect album closer. A comment on this latest Monkees reunion, as well as a nod to the past, Dolenz sings:

The Monkees are going out on tour — and it is even possible that Nesmith will join them here and there. Short of seeing them live, Good Times! is the best way to relive the charm of The Monkees. After 50 years, the band can still summon its trademark charm – now deepened by decades of experience. In other words, a perfect way to acknowledge a milestone anniversary.