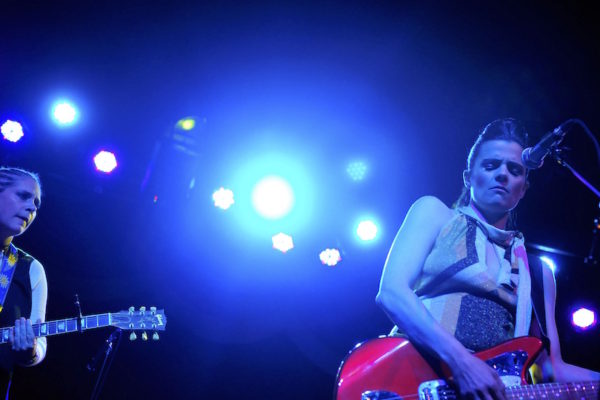 The all-female band remains the exception to the rule yet that doesn’t stop serious rockers like Fanny, The Bangles, Sleater-Kinney, and Antigone Rising from making a serious mark in the biz. 2018 marks the 20th anniversary of the latter group, an alt-country band that first gained mass public attention back in 2005 when their From the Ground Up got a lift from Starbucks’ Hear Music Series — ironic, given that these rockers have been more associated with drinks stronger than macchiatos, as illustrated by their last two albums Whiskey & Wine, Volumes 1 and 2. Well, according to guitarist-songwriter Kristen Henderson, that’s about to change. Hear what else she had to say in this CultureSonar interview.

Q: You’ve opened for some of the biggest bands out there: the Rolling Stones, Aerosmith, Joan Jett… What did you learn in the process?

A: I think the biggest lesson I learned was to always be kind and aware of other artists on the bill. As famous as all these artists are, they took the time out to get to know us and were genuinely interested in us as artists.

Q: Do you have a favorite city to perform in?

A: It’s hard to pick a favorite — it really is. Wherever we go the people are always so great. But over the years I would say Eddie’s Attic near Atlanta and just recently, the FTC in Fairfield, Connecticut are two favorites.

Q: Your two most popular videos by far are related to your song “That Was the Whiskey.” What do you think it is about that song that has resonated with such a large audience?

A: I think it’s as much about the beat as it is the lyrics with this one. It’s just a fun song and I think many people can relate to it because we’ve all had a friend who’s had one too many…if you know what I mean!

Q: Your band does a rockin’ cover of Queen‘s “Fat Bottomed Girls” on the star-studded tribute album Killer Queen. What was your favorite rendition by another artist on that album?

A: Ingram Hill’s “‘39” is one of my faves mainly because they’re good friends of ours and that was a really special time in both of our band’s careers.

Q: If you were going to devote an entire album to covering a single artist, who might that be?

Q: As well as traditional concerts, you use your music as part of empowerment workshops for your nonprofit organization, Girls Rising. Do you have any particularly memorable stories from this aspect of your career?

A: Absolutely. The outreach workshops have been the most rewarding aspect of our entire career. We spent an afternoon performing and talking to kids in a Syrian refugee camp in Berlin that was life-changing for us. We also did a cultural exchange with the women of Ni’lin, a village in Palestine. It was so eye-opening for both them and us to spend time together learning about each other’s cultures. We are looking ahead to doing an outreach at the LA LGBT Center in the fall for homeless youth.

Q: Antigone Rising is back in the recording studio this year. What can we expect regarding your next release?

A: The new material is very focused. We aren’t singing about whiskey and wine anymore. We are trying to contribute as much as we can to this cultural shift for the better…!