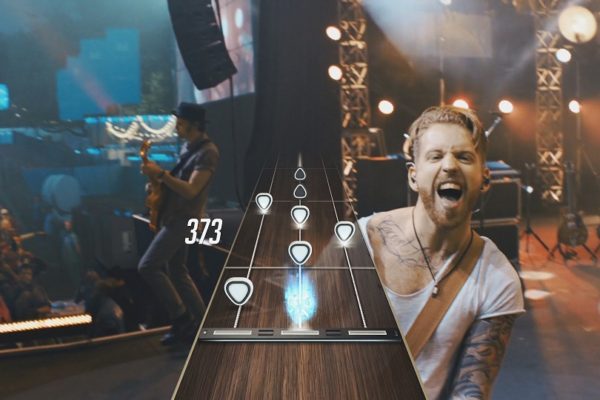 Around the year 2008, rhythm games seemed to hit a peak in popularity. It seemed like everybody had a plastic guitar or drum kit in their household, whether that be Guitar Hero or Rock Band. Shortly thereafter, with the advent of motion-control technology like the Kinect on Xbox 360, games like Dance Central found an audience grooving to the music at awkwardly hilarious get-togethers all over the world. In the years since, sales may have declined among these massive hits but truthfully, rhythm-based games have never been better. We’ve got plenty of proof below.

Guitar Hero Live
[amazon template=right aligned image&asin=B01K7P9HSS]This ain’t your daddy’s Guitar Hero. Utilizing the wonderfully goofy world of Full Motion Video (FMV), a style that was hugely popular back in the 90s — think Night Trap and 7th Guest — you get to feel like you’re actually in a band. The experience simulates the POV of the guitarist. If you don’t play so hot, the crowd and your band mates show disappointment. If you rise to the occasion, they’ll all be rocking out right along with you. A separate mode, called Guitar Hero TV, lets you play along to music videos, live against other people online. You even gain experience to get better power ups that aid your performance. As to the guitar itself, there are three frets of buttons but six buttons total as if you had two strings. This allows for bar chords, power chords, and other intricate finger placements. Looking for a big twist on an established franchise? This game’s for you.

Rock Band 4
If you want a more familiar experience, Rock Band 4 brings it with gusto, upgrading with just a few changes worth checking out. Most notably, you can now create your own solos. The game encourages an individualistic style then evaluates how close your improvisation is to their suggestions of longer chords or fast notes in succession. There’s also harmony support on vocals, and drum fill. The game comes with 60 new licensed songs but you can also choose from its back catalogue online with over 2,000 tracks.

Thumper
Anyone who talked to me late last year got an earful about Thumper, a rhythm game set in a psychedelic hell-scape. Using only a few buttons on a controller, you guide a mysterious silver beetle around twists and turns battling monsters along the way. The game is extremely unforgiving (if you mess up twice, you die) and each level speeds up faster and faster even changing time signatures to create one wild ride. The original music is bizarre and was created by Brian Gibson, the bassist of noise rock duo Lightning Bolt. One warning: Don’t break your controller when you inevitably rage quit hours later. One perk: There’s a version in VR!

Just Dance 2017
Some people would rather move to music than make it. For those folks, there’s Just Dance 2017 which exists on every console from Nintendo Switch to a standard PC. The game has some neat innovations like its “Machine” mode that has you working through different routines in order to power an alien spaceship. The real hook, however, is its Just Dance Unlimited subscription service that gives you access to every single Just Dance song ever released as well as new entries so that your get-togethers will be popping off with the hottest tunes out there.

PaRappa The Rapper
Wait a second, isn’t that game like 20 years old? Yes, yes it is, but hold the phone! They’re totally re-releasing a remastered version for the Playstation 4 in 2017. For anybody who doesn’t know, PaRappa The Rapper was a phenomenon for the original Playstation that introduced a whole generation to this now-standard genre. You take on the roll of PaRappa, a cartoon dog that must rap his way through six stages to win the heart of his flowery love interest Sunny Funny. The game gives you button press prompts scrolling at the top of the screen, and you must hit them in time with the song to keep PaRappa…well, rapping of course. The game has a lot of style, the songs are solid, and it’s great for players of all ages. I’m not sure if it holds up but I suppose we’ll see in due time.